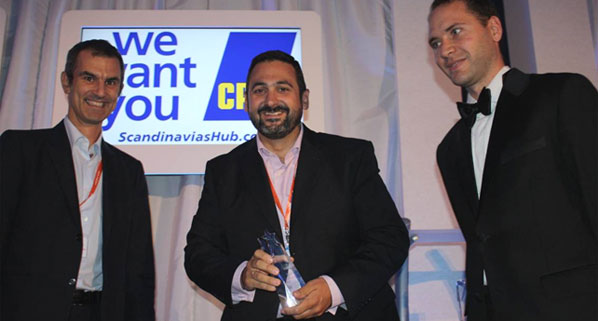 Last July, Spanish low-cost carriers (LCC) clickair and Vueling completed their merger to create what is now Europe’s fourth largest LCC after Ryanair, easyJet and Norwegian. The ‘new’ Vueling operates a fleet of 37 A320s and has in the last 12 months carried 11 million passengers from Barcelona and other smaller bases across Spain. 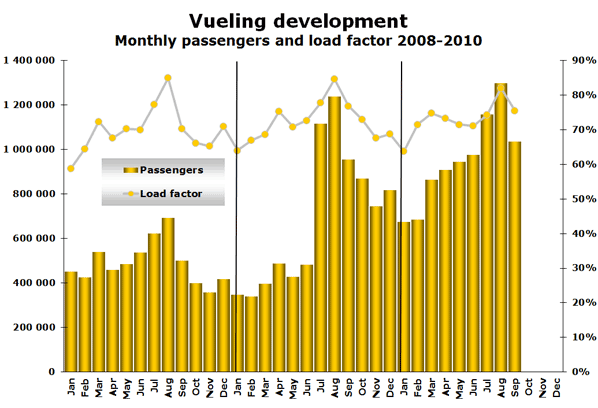 Passenger numbers in the third quarter of 2010 are up 5%, while flights operated have increased by 7% (and ASKs are up 11%), resulting in load factors dropping two percentage points. The only months in which the airline exceeds an 80% load factor is August.

Domestic flights account for around 50% of the airline’s operation during summer and around 55% in winter. However, there are some significant seasonal differences. During the peak summer period, from the airline’s main Barcelona hub, the leading domestic destinations are Ibiza and Mahon (eight daily flights each), and Malaga and Palma (five daily flights each). In winter, Madrid becomes the busiest with 12 daily flights (compared with just three in summer peak), while Seville gets seven daily flights compared with just four during the summer. Meanwhile, frequencies to Ibiza and Mahon are reduced to just two per day.

Vueling’s main base at Barcelona El Prat airport has been operating as a proper hub since 5 July, as the carrier now offers for sale connecting flights through the airport. Given Barcelona’s location, most of these connection opportunities will be from domestic to international flights and vice-versa. Vueling has expanded into new markets in the last year. During the summer peak season, the airline flew to Istanbul’s Sabiha Gökçen Airport from its Barcelona base, where it is under increased competition and has responded by offering connections.

This summer, Vueling operated over 60 international routes to 21 countries, accounting for half of the airline’s weekly seat capacity. However, apart from Italy where its serves seven cities (Rome, Milan, Naples, Palermo, Pisa, Venice and Verona), in all other countries Vueling serves just one city, with the notable exception of Russia where it serves both Moscow and St Petersburg. 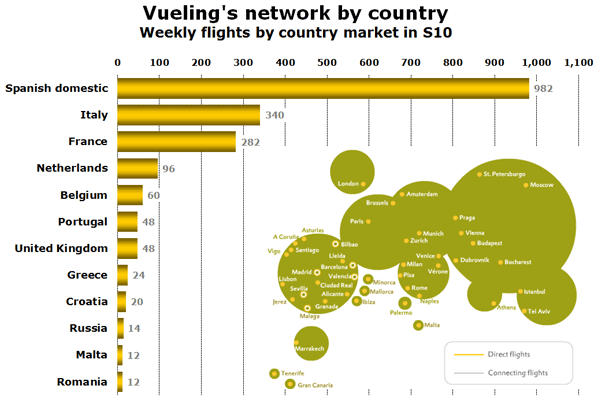 The ‘old’ Vueling did not operate any flights to Germany or the UK, but clickair did. Now Vueling operates just a single route to Germany (between Valencia and Munich) and three routes to the UK, which is notable for the fact that Vueling is arguably the only low-cost carrier to serve London Heathrow, which it flies to from Bilbao, La Coruna and Seville. The only route operated completely outside of Spain is between Paris Orly and Rome Fiumicino. Other countries served this summer include Jordan, Morocco and Israel.

Ciudad Real gets Barcelona and Paris services this winter

This winter sees the addition of Ciudad Real airport to the airline’s network. Vueling will start serving Barcelona four times weekly and Paris Orly twice weekly from the beginning of November. Other new routes starting this winter are Bilbao to Milan Malpensa and Palma to Rome Fiumicino, although both of these routes are already served by the airline via Barcelona. In total, the airline is operating just 60 non-stop services this winter compared with 95 during the summer season. The number of domestic routes is cut from 34 to 25, while international routes are reduced from 62 to 35, mainly due to the seasonality of many routes. Based on current schedule data and analysis of the airline’s operations last winter, it looks likely that Vueling will operate 25-30% fewer flights per week during the winter season than it does during the summer season.

The airline’s latest quarterly results for Q3 reveal that the airline made a net profit of €43 million and that it will grow its fleet by at least three aircraft in 2011.