AeroSvit has launched 20 new routes this year including 12 from Kiev; reports record passenger numbers in August This year has seen a major resurgence at Kiev-based AeroSvit. Having started the year with monthly passenger numbers well below those achieved in the last three years, this summer has seen an explosion of new routes as a result of which demand reached record levels in both July and August. The start of the winter season has seen the airline launch four more routes from Kiev to Copenhagen, Minsk, Tashkent and Yerevan, raising the number of destinations served non-stop from the Ukrainian capital to over 40. 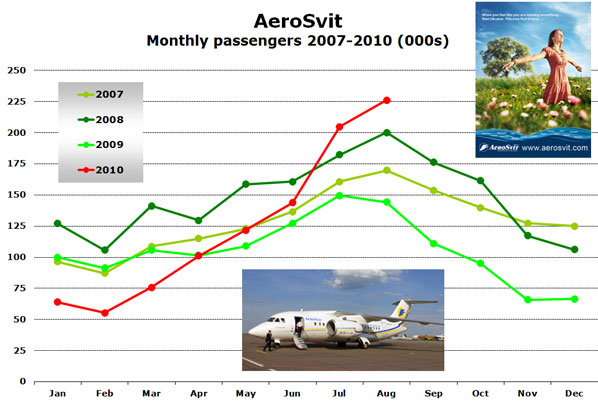 16 new routes started this summer; half from regional airports

During this summer, AeroSvit launched 16 new routes from five Ukrainian airports. Half of the routes were from the airport’s main base in Kiev, but just as many were launched from other regional airports in the Ukraine.

The airline does not operate any scheduled flights to France, Spain or the UK, and apart from the new daily service between Dnepropetrovsk and Berlin Tegel, the only other German service operates four-times weekly between Kiev and Hamburg.

The airline’s fleet comprises three 767s, around a dozen 737s (-300s, -400s and -500s) and two Antonov AN-48s, for which it was the launch customer back in 2009. The 767s enable the carrier to operate a number of long-haul scheduled services. This winter it will operate to Bangkok (six times weekly), Beijing (four times weekly), Delhi (twice weekly), New York (five weekly flights) and Toronto (twice-weekly).