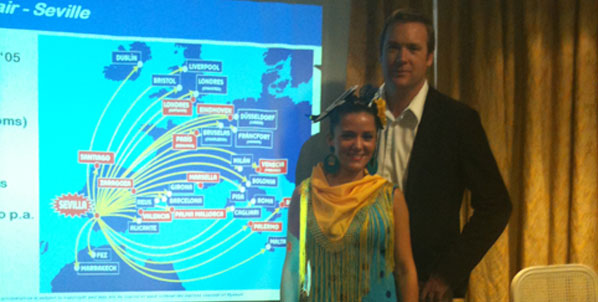 Ever wondered what a base launch actually looks like? Here’s an action shot of Ryanair’s Director of New Route Development, Ken O'Toole, assisted by “Maria.”

This week saw the launch of Ryanair’s latest Spanish base in Seville. A total of 11 new routes have been started thanks to the arrival of two based aircraft. In addition, the airline will operate a further 14 routes this winter that were operated during the summer, with five other destinations served during the recently completed summer season.

More capacity than Vueling this winter

Ryanair’s route network at Seville, which it first started serving in 2005, is summarised in the table below.

Four of the five routes that were operated this summer but are not operating this winter are also not bookable for next summer. Frankfurt Hahn services were very publicly dropped last week but services to Bristol, Cagliari and Liverpool also appear to have been terminated. However, Dublin flights will resume next summer.