Tokyo’s downtown Haneda airport recently opened a fourth runway (D), an impressive piece of structural engineering with two-thirds of it resting on a man-made island, while the remainder rests on pylons planted in the bay. As well as a new runway, the airport also opened a new third terminal dedicated to international flights. As a result, the start of the winter schedule this week has seen a wide range of new international services start, with more to follow in the coming months. 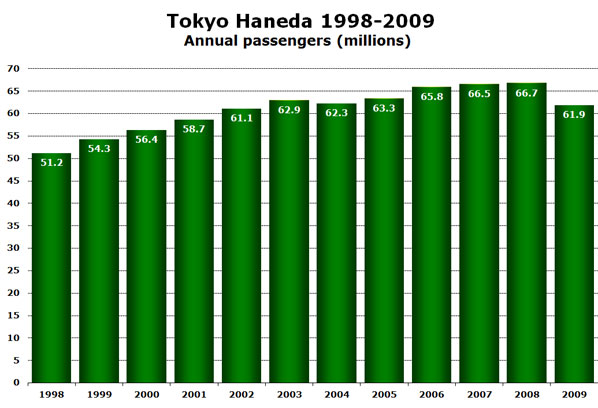 Between 1998 and 2008, the airport grew slowly but steadily, from 51 million annual passengers to almost 67 million. However, in 2009, passenger demand fell by over 7% to just under 62 million passengers and it also lost its role last year as Asia’s busiest airport as China’s Beijing airport stormed to the top spot.

Japan’s domestic air networks are dominated by ANA and JAL, with ANA the bigger of the two carriers at Haneda. The two carriers have a duopoly on many of the domestic routes with only Skymark offering a significant alternative on five of the top seven domestic routes. In fact, Skymark only launched flights to Kumamoto and Kagoshima this week, with both routes operating with three daily flights. 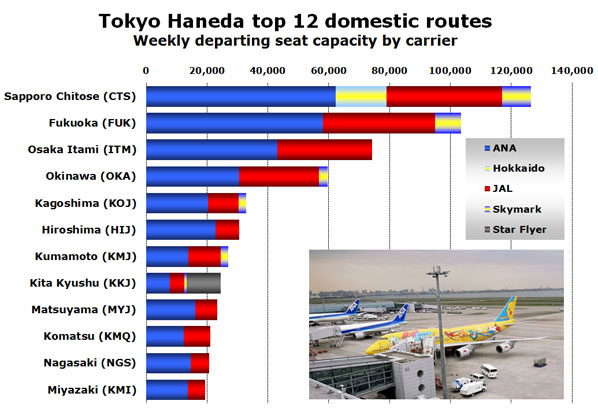 On the Sapporo Chitose route, all four competing carriers offer at least 10 daily flights with ANA offering over 25 daily flights on weekdays. A total of 48 domestic destinations are served from Haneda with 23 of them served by just a single carrier.

While ANA, JAL and several Asian carriers have been quick to grasp the opportunity to serve Haneda, European and US carriers have been a bit slower. British Airways will launch London Heathrow flights from mid-February, while Air Canada (from Vancouver), American (from New York JFK) and Delta (from Detroit and Los Angeles) will introduce their services from the end of January.