Henrik Peter Jørgensen, Copenhagen Airport's VP communication, explained how the growth of low-cost carriers at the airport led to the decision to make a DKK 200 million investment in the new CPH Go. "Low-cost carriers are not a fad. They are not going away. They are here to stay and here to stay at Copenhagen Airport." Photo: (Lars Mikkelsen/CPH)

Only a few years ago, primary airports and low-cost carriers were mutually exclusive. With the construction of Copenhagen Airport’s new low-cost facility CPH Go, the Danish capital’s airport is reaffirming that this is no longer the case. The airport’s vice president sales, Carsten Nørland, and vice president communication, Henrik Peter Jørgensen, explained the rationale behind the investment.

As low-cost carriers (LCCs) have emerged and grown rapidly in the last decade, most airports have had a slow reaction, argued both Nørland and Jørgensen. LCCs initially focused on secondary airports, but as the business model has matured, it has shifted focus and a major share of today’s development takes place in primary airports.

However, most airports have not adapted to the needs of the new customers. A ‘one size fits all’ mentality has prevailed, where business fundamentals such as market segmentation have been ignored because of the scale of investment required to adapt to the new customers. Instead, all airlines have been offered the same product at the same price. Airlines have simply been made to pay for all airport facilities, no matter which they have a need for, Nørland explained.

At Copenhagen Airport, the decision was made to target both types of airlines, satisfying the needs of both airlines with network carrier business models and low-cost models.

For LCCs, the result is the brand new pier CPH Go, an investment of 200 million Danish kroner (€27 million), which went under the working name CPH Swift during planning and construction. “With CPH Go, we have chosen a name that better describes the entire rationale behind the low-cost pier, the urge to travel, now that we can offer travellers more low-fare tickets to more destinations,” said Nørland.

Rather than a stand-alone terminal, CPH Go is connected with the international terminals with which it shares check-in facilities, security and shopping areas. Split operations would have driven costs up and the airport reasoned that it has already achieved efficient operations in, for example, its common security area. This also means that passengers travelling through CPH Go are able to make use of the same ground transportation options as any other passengers, which includes a metro connection with Copenhagen and trains throughout both Denmark and Sweden, which is connected with the airport across the Øresund Bridge.

The facility’s launch customer, easyJet, was deeply involved in the project from start. With help from the airline, Copenhagen Airport was able to ascertain what operational requirements the new facility should be designed to accommodate. One of the first conclusions drawn was that CPH Go should have no air bridges, which are slow, expensive, can break down and only board passengers from one direction, whereas stairs at both the front and back doors speed up the boarding and deboarding process.

A basic, scaled-down and efficient concept was developed for CPH Go, which its customer airlines must comply with in order to qualify to use the facility. The airline must be able to accomplish 30-minute turnarounds and must not require baggage transfer facilities, as the pier is intended for pure point-to-point operations. At least 90% of passengers must either check in online, via mobile phone or use airport self-service kiosks, which have been installed in the CPH Go check-in area to limit the number of check-in desks needed. Also, the airline must accept that the check-in area is CPH Go-branded, which better utilises the desks, but leaves no room for the individual airlines’ own brands.

Carsten Nørland, VP sales, pointed out that the products offered in the full-service piers and CPH Go are distinctly different, justifying the new price differentiation. CPH Go's passenger charges are 35% lower than what the international fee used to be. (Photo: Lars Mikkelsen/CPH)

Just before the opening of CPH Go, approximately 18% of Copenhagen Airport’s passengers travelled on LCCs. In the airport’s record month of August 2010, that translated to 400,000 passengers. This can be compared to only around 1% low-cost passengers a decade earlier.

The growth has mainly taken place in the last two years, as a direct reaction to the announcement of CPH Go. Although the facility would still take some time to complete, the LCCs instantly saw that the airport had become ‘LCC friendly’, explained Jørgensen. By moving early, the airlines were able to build up a market share by the time CPH Go would open. As an example, easyJet operated four flights per day to Copenhagen two years ago. Now, it varies between nine and eleven flights a day.

A major hurdle for the airport was the need to have a price differentiation between the full-service terminal facilities and the new CPH Go in order to attract LCCs to the new pier. Importantly for the airport’s many full-service carrier clients, there would be no discrimination, but a clear distinction between the two products. “You get what you pay for,” Nørland summarised.

Although Copenhagen Airport has been a private enterprise since 1992, albeit with 40% state ownership, airport fees are still subject to state regulations. The airport therefore had to seek approval for the prices. Eventually, new fees were set where the passenger charge for using CPH Go is DKK 20 (€2.7) lower than for international passengers in the airport’s other piers. However, as the airport’s charges are lowered overall, the fee for CPH Go is in fact 35% lower than what has been offered prior to now.

Changes are also taking place in Copenhagen Airport’s retail area. The airport has surveyed passengers about their shopping requirements and concluded that a greater price differentiation is needed. Hoping to increase the spend per head, the airport now takes in more high street brands at the expense of high-end luxury retailers. An example is the young, trendy and inexpensive juice bar and café Joe & the Juice, which has instantly become a huge success along with the stylish discount retailer Tiger.

The ‘dual airport strategy’, which has made Copenhagen Airport differentiate between network carriers’ and low-cost carriers’ needs, has also meant that the airport has been able to improve its network carrier product, making the distinction between the two products even greater. Together with SAS, the airport has formed a strategic partnership, in which the two companies work together to improve the airport product. One of these is the ‘World Class Transfer’ project, which has managed to reduce Minimum Connecting Times (MCT) for the Scandinavian flag carrier. Intra-Schengen connections made on SAS have had their MCT reduced from 40 to 30 minutes as a direct result of the project.

A major reason is that SAS, to a large extent, has had its flights located on one pier, Pier B, and an overhaul of the baggage transfer system has also speeded up the connection process. Similarly, Norwegian, which also has considerable transfer traffic in Copenhagen, has had the majority of its flights located at Pier A. These changes have already generated 70 further connection opportunities in the SAS network alone, with potential for more as SAS’ partner airlines are brought on board the project. This work strengthens Copenhagen Airport’s competitiveness with other hub airports across Europe.

On 31 October 2010, CPH Go opened with easyJet’s ten daily flights all moved over to the new facility. Danish media were keen to report on the major event.

The ribbon was cut by Copenhagen's Lord Mayor, Frank Jensen, who spoke to the invited audience. "The continued expansion and strengthening of Copenhagen Airport is a necessity for attracting more tourists and more business investment to the region. A strong international airport contributes to ensuring good access to Denmark, which we depend on in the international competition between cities and regions," Jensen said. (Photos: Ernst Tobisch/CPH) 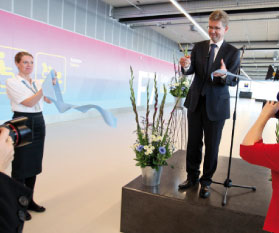 Launch customer easyJet introduced a new service from Basel with the opening of CPH Go. In 2009, the airline grew by 60% at Copenhagen and 2010 will see an increase of 30%. 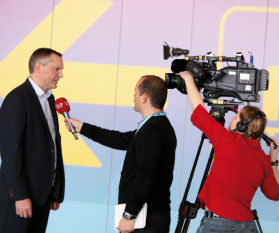 Henrik Peter Jørgensen, Copenhagen Airport's VP communication, told Danish national news: "Copenhagen Airport is one of the major European airports with the greatest growth this year. So far this year, passenger numbers have grown by 8.2 percent, and this is not least thanks to low-cost carriers' continued huge growth."