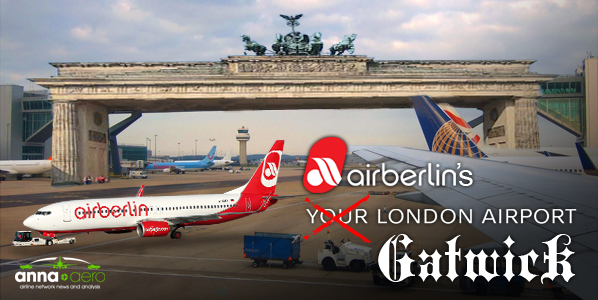 anna.aero wonders if airberlin’s future oneworld friends at British Airways have lent it the slots for the Gatwick move, just like it did for Aer Lingus’ much-missed base.

Germany’s second biggest carrier (and future oneworld member) airberlin has confirmed that it will be starting double-daily flights from London Gatwick to Hannover and Nuremberg, starting from 7 February.

airberlin has been serving the London market since September 2002 when it began ‘Euro Shuttle’ operations from Berlin Tegel, Dortmund, Münster/Osnabrück and Paderborn/Lippstadt to London Stansted. In December 2005, the airline even began domestic flights from Stansted to Belfast City, Glasgow and Manchester, but these were abandoned at the end of the summer 2007 season. In total, airberlin has operated scheduled services from Stansted to 17 destinations during the last eight years, including Alicante and Palma in Spain. 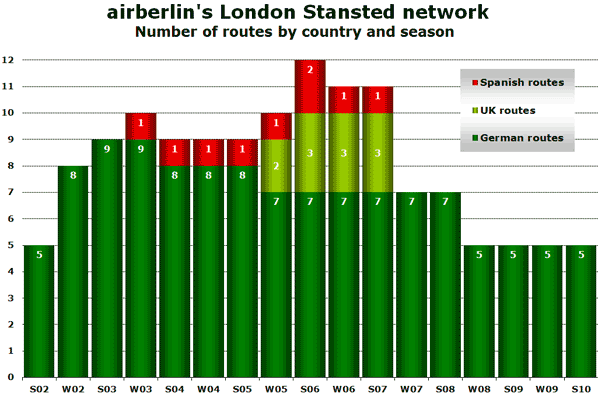 Routes to Berlin Tegel and Munich were dropped at the end of the summer 2008 season. Since 2009, airberlin has been operating just five routes to London Stansted; from Düsseldorf, Hannover, Münster/Osnabrück, Nuremberg and Paderborn/Lippstadt. Hannover and Nuremberg services at Stansted will end on 6 February, but the other routes will continue at Stansted. In December, the airline will even start a new four-times weekly service from Stansted to Salzburg in Austria, aimed at the seasonal ski market.

This summer, Hannover was linked to six airports in the UK. airberlin’s Stansted service competed directly with germanwings, while Flybe served the German city from Birmingham, Manchester, Newcastle and Southampton. Finally, bmi operated up to three daily flights from London Heathrow. Of these services, only Flybe’s Newcastle service is not operating this winter.