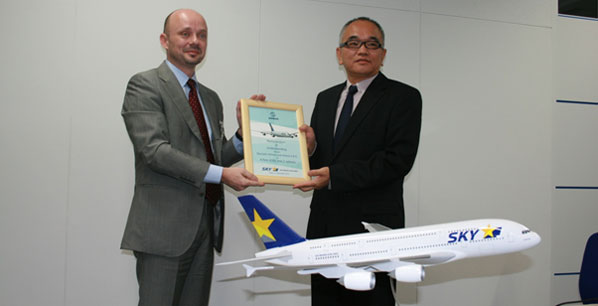 On 12 of November, Skymark signed its A380 MOU for the “four firm plus two options” (for 2015-16 delivery). After signing, Skymark held a widely-reported briefing session for analysts in which CEO Shinichi Nishikubo discussed the plans for the A380. Afterwards, anna.aero spoke to Aya Isogai from Skymark Airlines’ Corporate Planning Division and she clarified some of the points for us:

“Our CEO talked about our current plans for the A380 operation in the session, but to tell you the truth, most of the plan is not confirmed yet. For example, as to the destinations, he named various destinations, [London, Frankfurt, Paris, Rome, NY, LA, Honolulu, Vancouver, Singapore, Bangkok and Melbourne] but this is not confirmed yet. Just only a plan (and also our company’s dream).

As the size of Skymark is still relatively small, so our strength is to change our strategy quickly.

Therefore, these answers from me are our current real status:

anna.aero: What kind of seat configuration are you looking at? Single-class, high density? Multiple classes?

Isogai: We are considering both.

anna.aero: Will the A380s be used internationally only or will you continue the Japanese tradition of operating large aircraft domestically as well?

Isogai: We will operate domestically first as demonstration flights, but our final goal is the long-haul international routes.

anna.aero: Will you be able to retain the low-cost carriers’ quick turnaround advantages against network carrier competitors when you operate the large A380?

Isogai: We will not cling to “the low-cost carriers’ quick turnaround” for our international flights.

anna.aero: Will you provide connections between domestic flights and international?

Isogai: We have no plan for connecting flights.