Besides the UK, the other group of four “big” EU economies also performed nicely with Germany 3.4% more seats, France +4.5%, and Italy +11%. The real star markets with strong growth were Russia +20.4%, and Turkey +18.7%. (That’s a real mainstream Irish newspaper front page, by the way – not an anna.aero creation!)

Analysis of schedule data provided by the world’s airlines to OAG reveals that seat capacity at Europe’s airports at the beginning of the winter season is up 5.8% versus the same period last year (when it was down 2% on winter 2008), planned aircraft movements are up 4.3% and the number of airports with scheduled services has risen from 620 to 635.

Unlike last year, when only eight of the top 25 countries reported capacity growth, this winter the figure is 22, with only Greece (-9.0%), Ireland (-7.4%) and Sweden (-0.5%) reporting a year-on-year decline in departing seat capacity for early November. All of the top 10 country markets are registering growth, with Russia recovering strongly (+20.4%) and Turkey (+18.7%) recording a second successive year of growth in excess of 15%. After a 25% fall in winter 2009, Ukraine has bounced back with double-digit growth this winter thanks to the likes of AeroSvit. 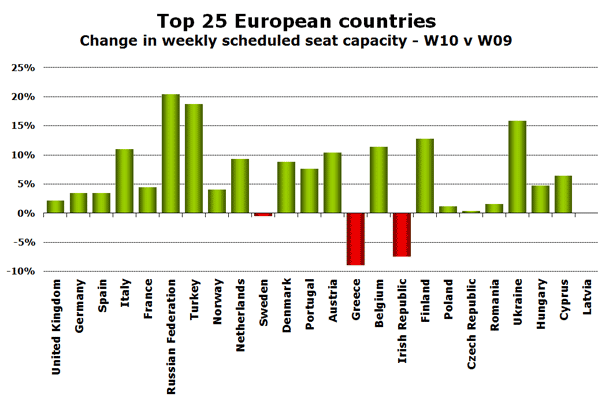 This time last year, we highlighted that a 19% reduction in capacity at Irish airports could in part be explained by the imposition of a €10 tax on air travel and wondered how long before the country reversed its decision and followed the lead of Denmark and the Netherlands in scrapping such a counter-productive scheme. Well, the Irish government has kept the tax in place and capacity this winter is down a further 7%. To make matters worse, both Germany and Austria have now decided to introduce similar revenue-generating taxes in 2011. It will be interesting in due course to see how summer 2011 capacity in these countries compares with this summer.

Among the main Central European countries, Poland, the Czech Republic and Romania are all reporting capacity growth of less than 2%.

Lufthansa holds off Ryanair for top spot; six airline up 15% or more

A detailed look at scheduled capacity by airline reveals that some legacy carriers are fighting back while several LCCs are reporting modest growth. Among the half dozen airlines reporting capacity growth of more than 15% this winter are four legacy carriers (Aeroflot, Alitalia, Austrian and Finnair) and just two LCCs (easyJet and Pegasus). However, of the six carriers to report a decline in winter capacity, three are flag-carriers (Aer Lingus, Air France, Iberia), while the other three are neither LCCs nor flag-carriers (airberlin, Air Europa and Spanair). 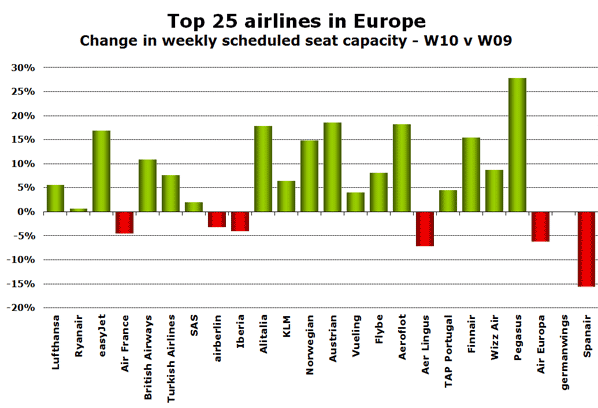 Ryanair’s minimal growth may be a function of the time period chosen, but the airline has made it clear in several briefings that winter capacity will be cut at several airports where profits are being eroded by higher airport charges and/or taxes. easyJet’s double-digit growth will be examined in more detail in next week’s anna.aero.

All growing this winter among top airports in Europe

A comparison of the leading airports across Europe reveals that all are reporting year-on-year capacity growth. 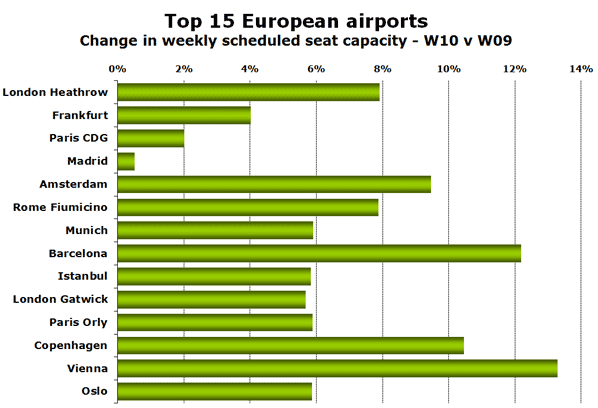 Among the five major European hubs, Amsterdam leads the way with capacity growth of over 9%, while London Heathrow is up almost 8%. Three airports are reporting capacity growth of more than 10%; Barcelona, Copenhagen and Vienna. Barcelona is experiencing a surge thanks to Ryanair’s new base there, Copenhagen has its new CPH Go facility and growing low-cost networks from Cimber Sterling, easyJet and Norwegian, while Vienna is reaping the benefits of Lufthansa’s new network strategy for Austrian. However, with the introduction of a new air travel tax next year, Vienna’s rapid growth may be short-lived.