oneworld’s Russian revolution: Of S7’s 60 destinations served from Moscow Domodedovo, 50 are in Russia and the CIS, and 20 (of 26) from its second base in Novosibirsk, Siberia. In Moscow, Vladimir Obyedkov, CEO S7 Airlines, and Alexander Steblin, CEO of S7 affiliate Globus, celebrate taking on the alliance’s full range of services and benefits.

Russia’s S7 Airlines (originally known as Siberia Airlines) this week became the latest airline to become a full-fledged member of the oneworld alliance. Its subsidiary GloBus became an affiliate member. While the airline’s headquarters are in Novosibirsk, its busiest airport is Moscow Domodedovo, from where it serves over 60 destinations non-stop, with a fleet of mostly A319s and A320s. GloBus was formed in 2007 and operates a small fleet of 737s in an all-economy configuration. GloBus carried around one million passengers in 2009. 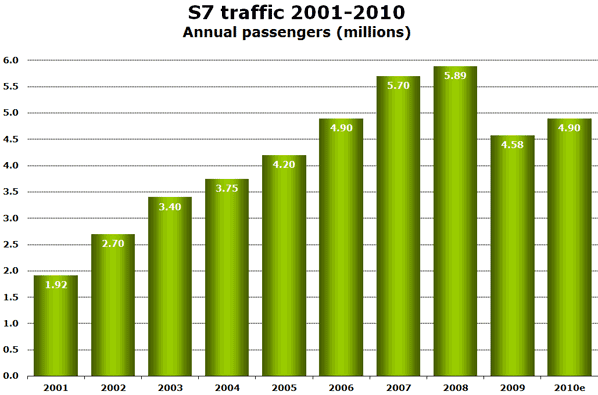 Source: ICAO (does not include figures for GloBus)

Monthly traffic data from ICAO shows that the airline was growing rapidly in 2008 until the global recession reached Russia. In the last four months of 2008, passenger numbers year-on-year started to fall rapidly, and in the first quarter of 2009 demand was down around 40% compared with the same period in 2008. Passenger numbers for S7 this summer have been marginally above those of last summer. 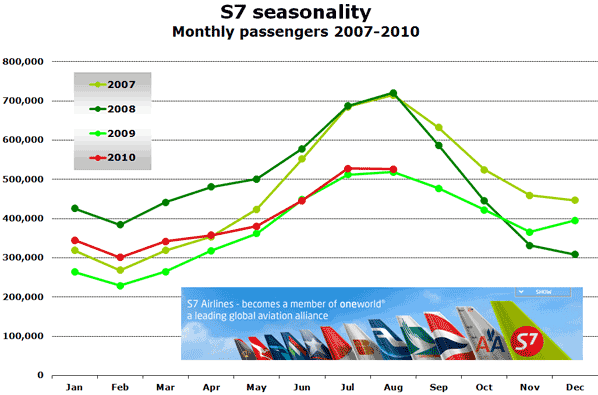 Source: ICAO (does not include figures for GloBus)

Over 30 destinations served daily from Domodedovo

Looking at schedule data for July (the airline’s busiest month this year) shows that over 60 destinations were served form Moscow Domodedovo, of which 35 are in Russia and a further 15 are in the CIS, leaving relatively few destinations in Europe where bilaterals generally are restrictive for Russian carriers. Nine of the 12 European destinations were served with just one or two weekly flights, the remaining routes being Bourgas and Varna (both in Bulgaria) and Frankfurt, which were all served daily. In total, 32 destinations are served at least daily from Domodedovo, of which 27 are in Russia plus Bourgas, Chisinau (Moldova), Frankfurt, Varna and Yerevan (Armenia).

The airline’s second base is at Novosibirsk from where during summer some 26 destinations are served non-stop, comprising 11 domestic routes, nine to CIS countries, two in China, plus Frankfurt, Hannover, Prague and Varna.