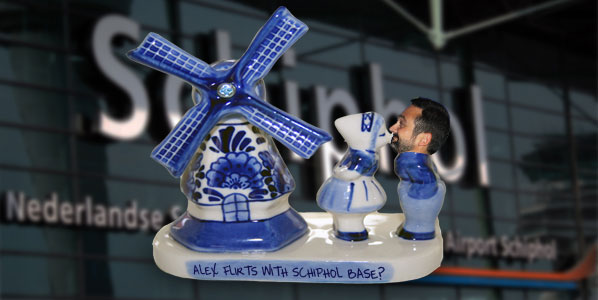 The Spanish low-cost airline has been granted almost three times its allocation of last summer's slots, equivalent to 11 additional flights a day. anna.aero asked Vueling CEO Alex Cruz about this and he suggested we should go and check all of Europe’s slot coordinated airports in order to get a clearer picture; unfortunately not all the slot coordinators make it as easy as the Dutch for us to do this.

Although anna.aero usually only presents data for announced routes and actual developments, we found it a bit too interesting not to engage in speculation when we came across liberally disclosed slot data for Dutch airports. Airport Coordination Netherlands has released data for slots allocated by airline, creating the opportunity for us to ponder about future developments at Amsterdam Schiphol.

Of course, the political nature of the slot request and allocation process should be considered: Although all airlines have nominally been given the full number of slots at Schiphol that they have requested, it is likely that many have applied for far more slots than they really need, and will have to give back these unwanted slots by the end of January.

Two airlines in particular caught our eye: Percentage-wise, Qatar Airways’ allocation almost trebles its slots and would translate to over six flights a week, an unlikely expansion of its current cargo-only services. Meanwhile, Spanish low-cost carrier Vueling, which only last week announced its Toulouse base and the intention to continue expanding outside of Spain, has been granted almost three times its allocation of last summer’s slots; equal to as many as 11 additional flights a day. If all these were used, it would look like Amsterdam might be Vueling’s next base. In fact, anna.aero confronted CEO Alex Cruz with this speculation.

Calling us “slot checkers” (we’re not sure what to make of that), unsurprisingly, Alex chose not to answer directly: “Well, no, of course, we can’t confirm anything.” Then he suggested, cryptically, that in order to uncover his next base, we should go and check all the slot applications at all the other European airports: “Are you sure that you have not seen an unusual number of slot requests at other European non-Spanish airports…?  Are you sure?” Unfortunately, not all the slot coordinators make it as easy as the Dutch for us to do this.

Of course, Vueling could simply intend to grow its network from Amsterdam to other bases, both existing and future. If it increased its Barcelona route to four flights a day, made all less-than-daily routes daily, and operated Toulouse twice per day (KLM did three a day this summer), that alone would take the airline from 6.5 to 12 daily flights in Amsterdam.

The airport’s second-largest low cost airline, easyJet, also appears to be growing rapidly at Schiphol. Its 58% slot growth would add almost 14 daily flights, bringing the airline to 37.5 frequencies a day.

There are also some clear indications of new entrants in Amsterdam next summer. Timisoara-based Carpatair seems to have ‘discovered partnerschip’ as the airline has been granted slots for the equivalent of six flights a week.

Another ‘new’ notable scheduled operator with slots granted is Japan Airlines, which dropped its Amsterdam route (out of Tokyo Narita) as recently as September this year. Having pulled out of the airport, the airline lost its grandfather rights and won’t get its slots back automatically. The Japanese flag carrier has, however, now been granted enough slots for 10 weekly return flights.

Only 13 airlines, including a few cargo carriers, have requested (and been awarded) fewer slots next summer than they operated the last summer season. The most notable shrinkage is Malév, which reduces its frequencies from four to two daily flights, although the explanation for this is that KLM has relaunched three daily flights between Amsterdam and Budapest, still resulting in a total increase between the airport pair.