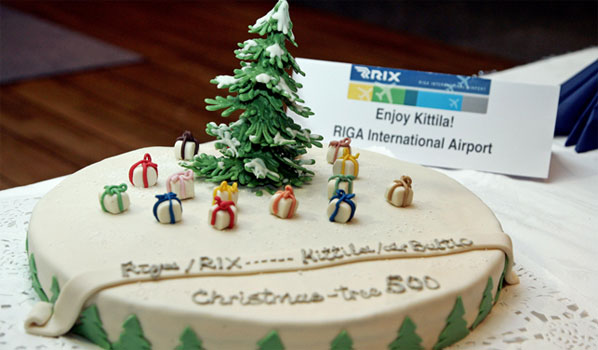 airBaltic is one of the top three of seven AEA airline double-digit growers. Routes like Riga to Kittila, Finland (launched earlier this month) are helping the carrier to grow in apparent defiance of gravity from sadly/badly hit Latvian economy. This cake also celebrates the legend that Riga is the birthplace of the Christmas Tree, something we’re doubtful about at anna.aero, we’re pretty sure it was a Nordic city called Wal-Mart.

The 30-plus members of the Association of European Airlines (AEA) have reported that in the period January to September their combined passenger numbers are up 1.7%, while capacity (ASKs) has fallen 1.5%, resulting in average load factors rising by 2.5 percentage points to 78.2%. Passenger number growth reached a new high for the year in September of 6.7%. In fact, apart from April when the Icelandic ash cloud caused traffic to fall by almost 16%, passenger numbers have grown every month this year. 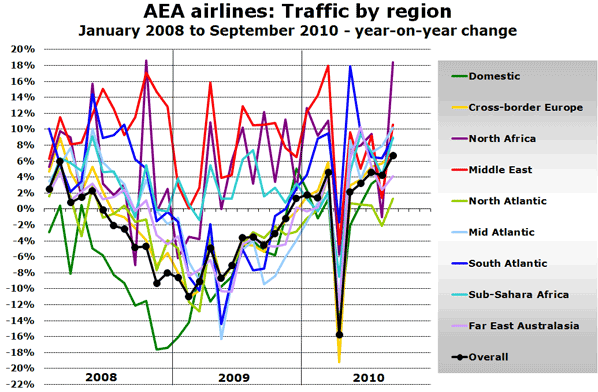 When analysed by traffic region, the worst performing geographic market is the North Atlantic. Total passenger numbers for the first nine months are still down 1.1% on a capacity reduction of just under 4%, driving load factors up almost three points to 84.6%.

Over the course of the first nine months of 2010, many AEA members have reported demand growth, notwithstanding the impact of the ash cloud in April. Seven airlines reported double-digit growth, led by Tarom and followed by Ukraine International and airBaltic. 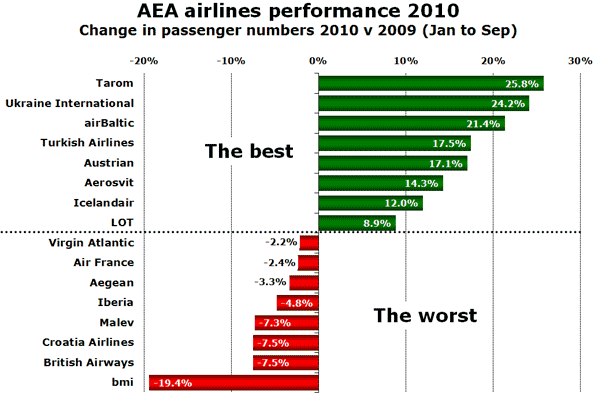 Three of the bottom eight airlines are all based in the UK; bmi, British Airways and Virgin Atlantic, reflecting the on-going difficulties of the UK economy, industrial action at British Airways, and Lufthansa’s decision to reduce capacity at its most recent acquisition bmi. 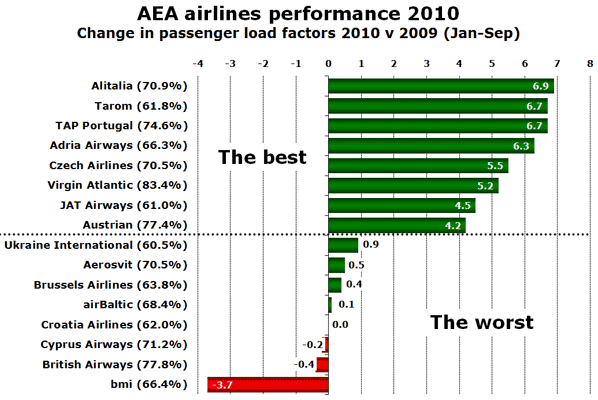 Tarom’s impressive growth has been achieved partly by a significant improvement in its ability to fill its flights with passengers, suggesting a new approach to revenue management. However, despite this positive trend its average load factor in 2010 so far has still been less than 62%. Airlines that have seen a significant load factor improvement starting from a higher base are Virgin Atlantic (78.2% to 83.4%) and Austrian (73.2% to 77.4%).

Only three airlines failed to improve their load factor in the first nine months of 2010 with British Airways and bmi once again managing the dubious distinction of having fewer passengers and less full aircraft. Cyprus Airways is the only other AEA carrier with less full aircraft in 2010 than in 2009.