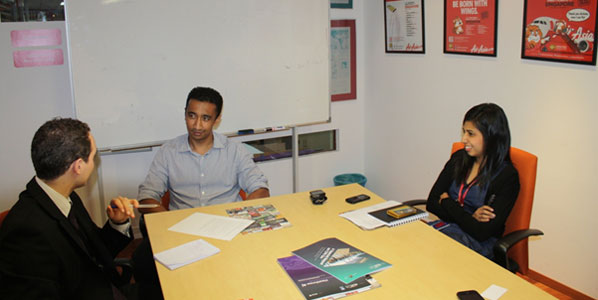 AirAsia X’s head of Route Planning & Regulatory Affairs, Senthil Balan (centre) and Subashini Silvadas (right) from AirAsia’s network management team. Some 50% of Air Asia X’s traffic feeds off the regular low cost AirAsia: “We expect a growing trend of people to connect from feeder destinations by ‘riding off’ AirAsia’s short-haul network” said Senthil Balan. Experts among you may recognise the back of head of anna.aero’s interviewer, Ryan Ghee.

There has been several airlines that have tried to make the long-haul low-cost formula work, but few have the true pedigree of a genuine affiliation with a genuine low-cost airline that AirAsia X has, including being able to utilise AirAsia’s established global brand and web presence, as well as feeding into and from AirAsia’s short haul network.

In addition, AirAsia X is the first such airline to spring from the heart of South East Asia, drawing on its rising middle class catchment and growing urbanisation. This anna.aero analysis includes comments from AirAsia X’s head of Route Planning & Regulatory Affairs, Senthil Balan, who we interviewed in Kuala Lumpur earlier this week.

AirAsia long-haul partner AirAsia X began operations three years ago in November 2007 with flights from Kuala Lumpur to the Gold Coast in Australia using an A330-300. Since then, AirAsia X’s network has grown to 14 destinations covering almost every major airport in Asia Pacific (in addition to London, Paris and Tehran). The only missing major Asia Pacific destination in its network jigsaw is Sydney, and AirAsia X expects to operate into this city in 2011. Its recent launches in the last few months include Delhi, Mumbai, Seoul and Tehran this summer, with Tokyo Haneda starting next month, Paris Orly next February (on Valentine’s Day) and Christchurch at some currently unspecified point next year.

The only route to have been tried and dropped was to Abu Dhabi, which began in November 2009 and was suspended in February of this year. In our interview, Senthil told us that the route was only dropped because the aircraft used was not the ideal type. “We’ll look again at Abu Dhabi for 2012. We believe there is tremendous potential to drive traffic between Abu Dhabi and our various hubs in Asia, and we continue to keep a keen eye on the impressive investments Abu Dhabi is making in promoting its global brand and developing its tourism infrastructure. We had healthy loads during our time on the route, and the overall market grew by over 40% during our time on the route.”

The airline’s fleet consists of nine A330s (one of which was delivered this week) and two A340s that are currently used on the London Stansted route due to the longer sector length. The A340s will also be used on the new Paris flights next year. The carrier has a fleet order of 25 A330s and 10 A350s. However, with deliveries of the still-to-fly A350 not expected until 2016, more European expansion seems unlikely at present.

AirAsia X began serving London Stansted in March 2009 with five weekly flights (the most that could be achieved with one aircraft, given the sector length), which increased to nine last summer with the arrival of a second ex-Air Canada A340. 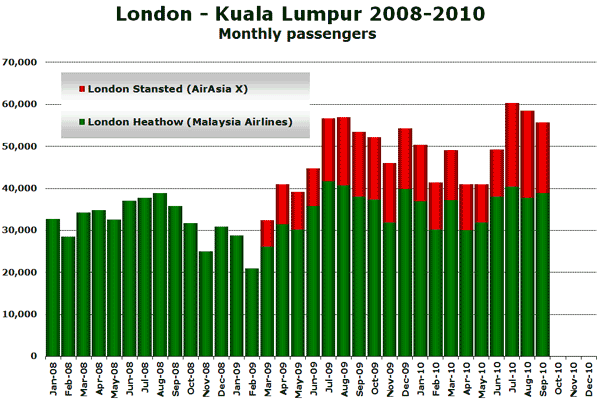 Asked by anna.aero about the London service, Senthil Balan told us “around 50% of traffic on the route was originating in Asia Pacific with the remainder from the UK and Europe, although there was a growing share of Australians using AirAsia X to travel on the Kangaroo route, due to the low fares and our investments in new seats.”

In terms of transfers, approximately 50% of Air Asia X passengers are point to point, with the remaining connecting. “As we move forward, that could change and we expect growing a trend of people to connect from feeder destinations by ‘riding off’ AirAsia’s short-haul network” says Senthil Balan.

One of the airline’s more unusual routes is the twice-weekly scheduled service to Tehran in Iran. According to Senthil Balan: “This was initially launched as a charter in March 2010 and the demand was fantastic. On the back of the successful charter, we decided to launch scheduled services in August 2010. We believe there is strong demand potential for travel between Iran and South East Asia – from a trade, tourism, and education perspective. Tourist arrivals from Iran was one of Malaysia’s highest source growth markets in 2009. It’s an underserved market with a massive catchment and it was a route that was clearly crying out for capacity. It is now being served twice weekly but next year this will be increased to four times weekly. The load factors have been very strong and eventually we’ll aim for a daily service.”

But while Tehran might seem like an early opportunistic choice of destination, with a long haul fleet consisting of some 50 aircraft resulting from current orders, it does not take a wild imagination to predict some of the cities which will be served by Air Asia X well within the next 10 years and indeed Senthil Balan usefully did this for us: “Going forward, we intend to build our scale in Asia-Pacific and look for opportunities to expand our footprint to destinations in Europe, Africa and the US. For Europe, opportunities that are being explored for the future include Cologne, Moscow, Istanbul and Prague”.

Senthil Balan seemed not particularly daunted by the challenge of developing and sustaining these services, nor those which are much closer to being launched, such as Paris: “We have launched 14 routes and every route has provided us with many opportunities and challenges. Naturally, in any new launch, one of the key things we focus is to build our brand and we have undertaken various strategies to achieve this, including leveraging from our sponsorship in global sporting activities (such as F1 and Moto GP) as well as capitalising on the power of social media. Then, of course, there’s nothing like launching a 99 Euro fare to promote a new route.”