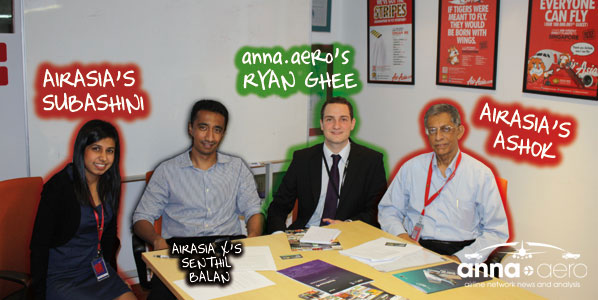 anna.aero: What new routes are you starting across the network in the next few months?

Ashok: AirAsia is starting two new bases – in Medan (Indonesia) and Chiang Mai (Thailand). Thus, we are launching routes like Chiang Mai to Singapore and Hadyai (both from 24 January 7x weekly), and Medan to Bangkok (from 15 January 3x weekly), and Hong Kong (from 16 January 4x weekly). We are also looking to penetrate into North India from Thailand by launching Bangkok to Delhi (a two phased launch 1-14 December 7x weekly) and Kolkata (from 1 December 7x weekly). Back home in Malaysia we are looking at launching Miri-Singapore soon (from 21 January 4x weekly).

anna.aero: Who do you see as your major competitors in Malaysia, Indonesia and Thailand?

Subashini: Our key competitors are the state carriers in each country and some LCC competition.

anna.aero: What are the different expansion challenges faced by the airlines expanding in Malaysia, Indonesia and Thailand?

Ashok: Mostly bilateral constraints due to limited traffic rights. We also face some slots constraints in some countries.

anna.aero: And when you are expanding fast, you have also had to drop routes too?

Subashini: AirAsia is aggressive. We take risks and operate and develop routes avoided by other carriers. For example, we started Kuala Lumpur-Bandung operations with daily frequencies and now we’re up to three daily. Previously this route was not served by any other airline, but now, we have others following our footsteps and operating this route. Any route cancellations are part of our long term strategy to perform better or move capacity to more profitable routes if routes we operate does not improve. We also removed some Macau routes from our other bases to consolidate our operations from Kuala Lumpur during the downturn.

anna.aero: With low fares presumably you have to deal with a no-show. How actively does the airline practice over-booking?

Ashok: No show rates vary depending on market, time of year etc…we do not practise overbooking.

anna.aero: What proportion of your network schedule (and aircraft operating plan) remains unchanged from one season to the next, or is every season basically a new schedule starting from scratch?

Ashok: Our schedule remains basically unchanged from one season to the other. However, we do make changes during the season if we need to change any timing due to market conditions or if there are any reductions or cancellations which are then replaced by another route.

anna.aero: Are there any plans in place for any further joint ventures?

Subashini: AirAsia is open to joint ventures as we expand our network reach, as these allow us to capitalise on traffic rights which are available in the JV country. We are confident we will develop new joint ventures based on our success in Thailand and Indonesia.