“There was, and still is, a strategic imperative to respond to growth…the decline in passenger numbers in 2009 was the first such decline since 1991…robust growth will return to the industry once the world economy recovers.”

“T2 was designed and built not just for this year or the next but for many decades into the future. To view it through the prism of the current downturn would be short-sighted in the extreme.”

Analysing the routes that Irish airports have lost in the last two years is a valid exercise, not as a pretty obvious “armchair comment” on what can happen to a country’s air transport industry in a severe economic crisis, but to highlight potential gaps in the market for new entrants to fill. After all, the Prime Minister’s comments last week, at the difficultly-timed opening of Dublin’s smart new €600 million Terminal 2, were exactly in line with what everyone who works in air transport always says you always have to do: plan for tomorrow. (“T2 was designed and built not just for this year or the next, but for many decades into the future.” Brian Cowen, Taoiseach.)

However, putting his stewardship of the economy aside, Mr Cowen definitely has to take large direct responsibility for a big chunk of his country’s air traffic decline due to the imposition of a €10 travel tax on all departing flights which came into effect in May 2009. He now obviously can’t afford to cut this tax, despite the fact that it would be much better for a tourist economy like Ireland if he did. Meanwhile the country’s overall economic situation has been troubling the airports for some time as reflected in the traffic statistics of the country’s four main airports at Cork (2.8 million passengers in 2009), Dublin (20.5 million), Knock (0.6 million) and Shannon (2.8 million). While the latest figures for October show year-on-year traffic growth at Dublin of 1%, when compared with pre-recession data from October 2007 Dublin traffic is down 15%, Cork traffic is down 22% while Shannon traffic has basically halved from 3 million passengers to 1.5 million. For the first 10 months of 2010 passenger numbers at DAA’s airports (Cork, Dublin and Shannon) are down 13.3% overall to just under 20 million. 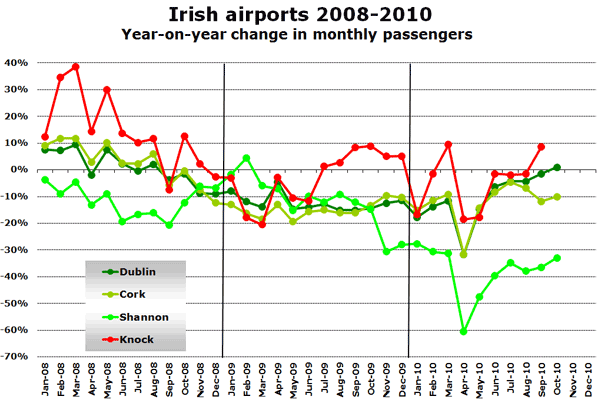 What good news there is at the airlines is mixed. While cutting back its network (and dropping bases in Belfast and London Gatwick) Aer Lingus has managed to return to profitability. But while Dublin-based Ryanair’s profitability continues to globally impress, the airline continues to adjust its network and will this winter be offering 100 fewer weekly departures from Irish airports (down 14%).

Ryanair responsible for 25 routes no longer served from DAA airports

anna.aero’s analysis of OAG schedule data for December 2010 and December 2008 reveals which destinations are no longer served. Considering only routes that were served with at least three weekly flights two winters ago, Cork has lost six routes, Dublin 18 and Shannon 16.

Ryanair is the leading culprit being responsible for 25 routes that are no longer served, followed by Aer Lingus with 10. It is worth noting that Ryanair has dropped other routes from Dublin (such as Budapest, Nice and Prague) but that these destinations are still served by other carriers.

In contrast, several destinations are now served (with at least three weekly flights) that were not served two winters ago. These are summarised in the following table.

Visitors to the “new routes” section of Ryanair’s website would be forgiven for thinking that the airline is starting 15 new routes from Dublin next summer. However, all of these ‘new’ routes are actually seasonal destinations which operated this summer. The only genuinely new route is to Tallinn in Estonia. Actual new scheduled services announced for the rest of this year and next year from Irish airports are summarised below:

Of these the most high-profile by far is a new daily, transatlantic service from Charlotte to be operated by US Airways during the summer season.