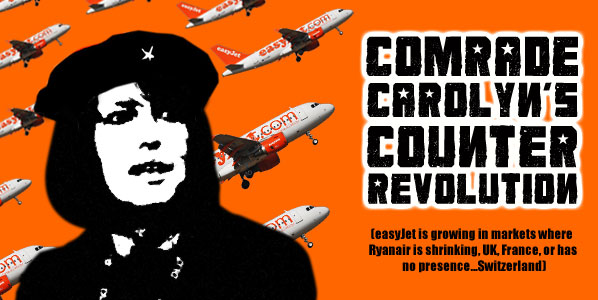 New easyJet CEO Carolyn McCall only took over on 1 July, but since then, the airline has announced a new base in Lisbon, increased profits and is growing winter capacity in places where Ryanair is cutting back...

easyJet recently celebrated the 15th anniversary of its first commercial flights (between London Luton and Glasgow) and also unveiled its latest annual financial results for the year ending 30 September 2010. But anna.aero is more interested in where this winter it will be allocating capacity flown by its fleet of now almost 200 aircraft. Our recent analysis of Ryanair’s winter capacity showed how the Irish carrier was ditching UK services in favour of Spanish growth while also cutting capacity significantly in Ireland and France.

By contrast, easyJet is cutting flights only marginally in just three of its 30 country markets, while adding significant capacity in France and the UK. The Netherlands, Italy and Switzerland will also all see at least 50 more weekly easyJet departures this winter than last. 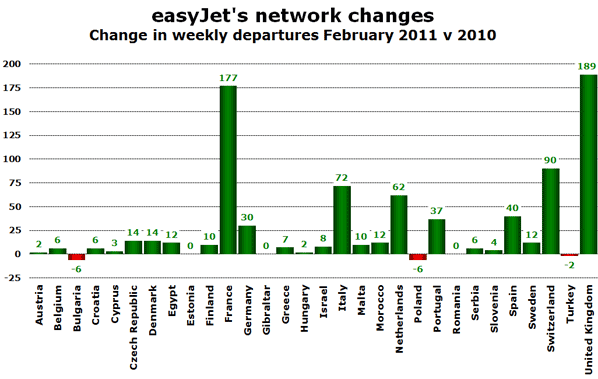 According to our analysis of OAG data, easyJet will be operating 408 routes next February compared with 343 this February, an increase of 19%. The average weekly frequency on routes will have fallen by 5% from 9.1 flights per week to 8.6. The total number of weekly flights will be up 13% from around 6,200 to over 7,000.

Countries that easyJet serves in winter but Ryanair does not include Croatia, Egypt, Gibraltar, Hungary, Israel, Serbia (Kosovo), Slovenia and Switzerland. Conversely, easyJet does not operate any winter flights to Ireland, Latvia, Lithuania, Norway or Slovakia, all of which Ryanair serves. Cake of 780 Weeks – easyJet chief executive Carolyn McCall celebrates the 15th birthday earlier this month with 15 other crew members. Despite all the rows about expansion, anna.aero’s analysis shows that easyJet will be operating 408 routes next February compared with 343 a year earlier, an increase of 19%.

Since last winter, easyJet has added or maintained weekly frequencies at 92 airports and reduced flights at just 18. The most new frequencies at a single airport have been added at Amsterdam (66), followed by Paris CDG (52) and London Gatwick (50). 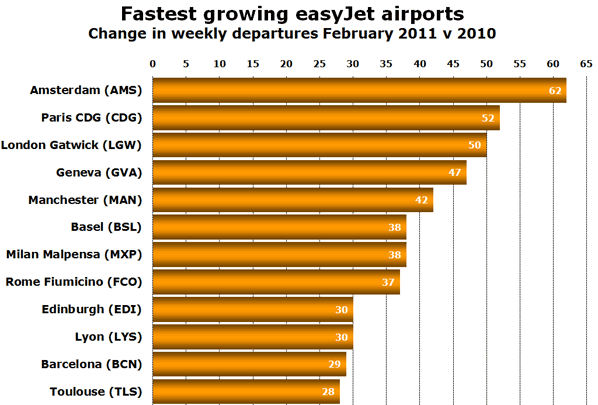 New routes from Amsterdam this winter (compared with last winter) include Barcelona, Berlin Schönefeld, Manchester and Prague, raising easyJet’s network at the Dutch airport from 12 to 16 destinations.

The number of airports served by easyJet in February has risen from 101 this year to 109 next year. A total of nine airports are new for the winter season, with just one, Turin, no longer served.

According to easyJet (as reported in their recent annual results), the airline’s annual network comprises 509 routes connecting 125 airports. During the last year, 115 new routes were launched while “28 underperforming routes were closed”.