Three US routes have been launched in Rome in 2010, including Alitalia’s Los Angeles service, here celebrated by ADR’s Sergio Berlenghi, Alitalia’s Marco Gobbi and the captain of the first flight. The US is now Rome’s fourth-largest international country market.

Europe’s sixth largest airport, Rome Fiumicino, which takes its alternative name from Leonardo da Vinci, has seen huge growth in the last decade when the Eternal City’s main airport has seen its passenger numbers increase by 45%. The main contributor is international traffic, while domestic passenger numbers have remained relatively stagnant over the years. 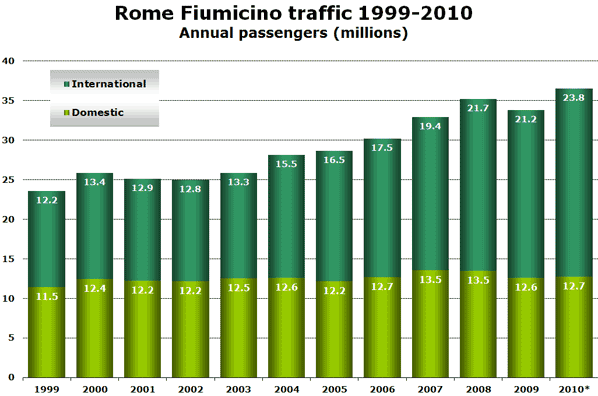 In 2000, traffic was boosted by the Vatican’s Great Jubilee, which drew large numbers of additional visitors to Rome. The airport also handled situations such as 9/11 and SARS well, as it – unlike most of the world’s airports – showed no significant sign of decline. When Alitalia decided to focus its hub operations to the Italian capital only in 2008, it gave a further boost to the airport, which then took a 4% hit by the global financial crisis. The effect was, however, short-lived and this year, the airport is again destined for a record passenger throughput. 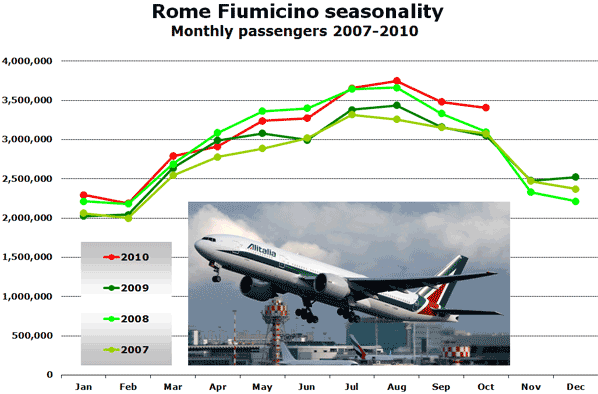 Unsurprisingly, Alitalia dominates the airport. At the end of the summer season, the airline had a 49% share of seat capacity. In 2007, prior to the airline’s strategy change abandoning its dual Milan/Rome hub system and focusing on Rome only, the airline’s share of Rome’s capacity was 41%. However, the airline later merged with AirOne and the two airlines’ combined seat capacity now is similar to that in 2007. Because other airlines are growing faster, the new Alitalia’s share of the market is even down from 56% for Alitalia and AirOne combined in 2007.

A distant second is easyJet, which has risen to a 5% share of capacity at the end of this year’s summer season. The airline has added 11 new routes in the last year, although six of these operated during the peak summer season only. This brings the airline’s current route portfolio out of Rome to 16.

Blue Panorama (including Blu-express) and Meridianafly follow easyJet, each having 4% of the airport’s capacity. Meanwhile, the largest airline in Rome without a base is the fifth-largest at the airport, Vueling, which serves the Italian capital from six Spanish destinations as well as Paris Orly. Its latest addition was Palma de Mallorca, however, this was at the expense of its Ibiza service.

Overall, the last year has seen a dramatic growth in new services at Rome Fiumicino and the airport was awarded the anna.aero Euro annie for the European airport with the most new routes. Other than the 28 new routes that were launched within Europe (with easyJet leading the way), the last year has seen the opening of five intercontinental routes to and from Rome. Alitalia launched services to both Amman and Los Angeles, while more US routes were launched by United (Chicago O’Hare) and US Airways (Charlotte). 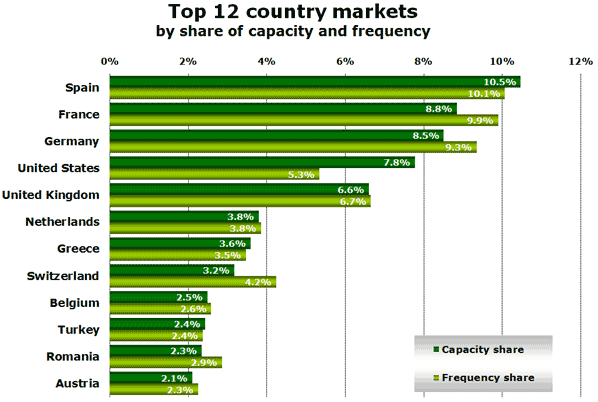 The increased number of US routes has resulted in the US market becoming the fourth largest international country market out of Fiumicino, making it larger than the UK market. Other than large and key European markets, Romania makes the top 12, largely caused by VFR demand from the large Romanian immigrant group in Italy. Qatar Airways increased frequencies on its Rome route to daily in March this year. anna.aero has come across rumours that Etihad may be the third and final ‘MEB3’ carrier to serve Rome, as the airline apparently has requested slots at the airport for the next summer season.

Route development in Rome does not show any sign of ending. anna.aero’s new route database already shows 13 announced routes, eight of which will take place in December. The long haul routes, all announced by current or future SkyTeam members, illustrate Rome’s increasing importance as an alliance hub. Both the Nairobi and Rio routes are re-launches, having previously been operated until 1998 and 2001 respectively, while Shanghai Pudong already is served by China Eastern’s future SkyTeam partner Alitalia.