The launch of easyJet’s service to Agadir from London Gatwick last November featured the specially re-written version of ‘Agadoo’ – performed by the original artists Black Lace themselves. It contains vital message for network planners everywhere:


(If you want to book Black Lace to sing your airline’s route launch jingle they are apparently fully available right now.)

In December 2006, the EU and the Moroccan Minister of Transport signed an agreement that effectively created an ‘open-skies’ environment between the two regions. Discussion had started a year earlier after the Moroccan government had decided that in-bound tourism should be a key driver of future economic activity, with a target of attracting 10 million tourists by 2010.

While France remains the undisputed number one market for international services to and from Morocco, the UK market has developed significantly in recent years. Between 2004 and 2007 passenger numbers between the UK and all Moroccan airports trebled from just 250,000 to over 750,000. However, since then, annual traffic has fallen back to around 550,000 in each of 2008 and 2009. 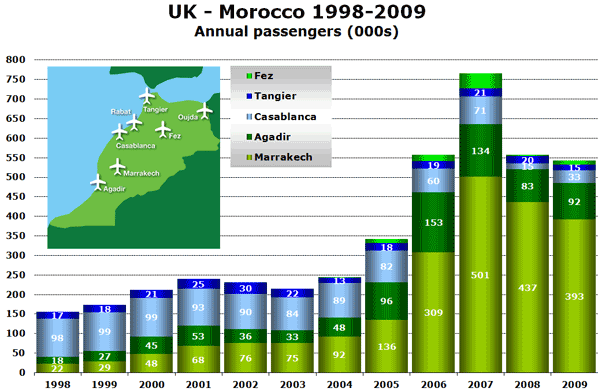 Figures for the first nine months of 2010 show that year-on-year traffic is up a massive 44%, suggesting that this year’s demand may even surpass 2007’s figure. Growth has been particularly strong during the summer months when passenger figures have been up over 60% compared with last year. Scheduled services that operated this summer that did not operate in summer 2009 include the following.

Some of these routes have evolved from being seasonal, winter-only routes to year-round routes. According to OAG data for this July, Marrakech is now served from six UK airports, including four outside of London, while Agadir is served from four UK airports, including two outside of London. Casablanca, Fez and Tangier are currently served exclusively from London airports.

Across all routes this summer, Royal Air Maroc (and Atlas Blue combined) offered 24 weekly flights, Ryanair 17, easyJet 12, Thomson five and Thomas Cook one. British Airways recently announced that from the start of next summer it would be re-entering the market by introducing three weekly flights between London Gatwick and Marrakech.