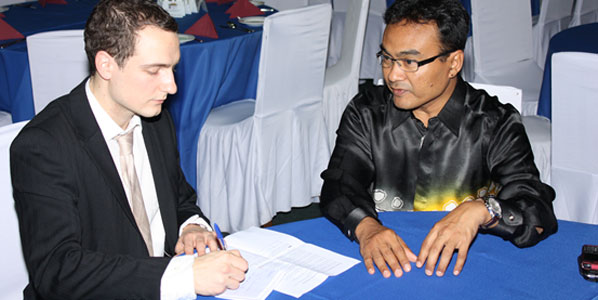 Sallauddin on KLIA 2 which replaces the temporary Low Cost Carrier Terminal built in 2006 for AirAsia : “We’re also open to the possibility of other airlines eventually operating from the facility.”

anna.aero: The brand new KLIA 2 terminal is currently under construction and will replace the temporary Low Cost Carrier Terminal, which was built in 2006 exclusively for AirAsia. How are you coping generally with the rapid expansion of this airline?

Sallauddin: KLIA 2 is a terminal predominantly for AirAsia but we’re also open to the possibility of other airlines eventually operating from the facility. The timing of KLIA 2 is allied to AirAsia’s expansion because they now have more long haul aircraft in their fleet and they need space for their widebodies.

anna.aero: Is it hard to attract new airlines when you have the region’s biggest and most successful LCC based at your airport?

Sallauddin: AirAsia’s expansion has obviously been very positive for KLIA.  Besides the direct competition introduced, the range of new routes offered by AirAsia and the other airlines are also quite different so I don’t think you can necessarily say that the success of its low-cost services has had the effect of turning others away.

anna.aero: There are currently no direct flights from KUL to the US. Is this something that is being explored?

Sallauddin: We would definitely like to have these flights but we know that it won’t be easy and it’s not something that airlines can rush into.

anna.aero: Which other routes will be explored from 2011 onwards?

Sallauddin: We’re looking at routes to Eastern and Central Europe where we’re lacking connectivity. We’re also looking at East and North Africa, where we’re constantly talking to airlines, but a lot depends on traffic rights so it takes time. 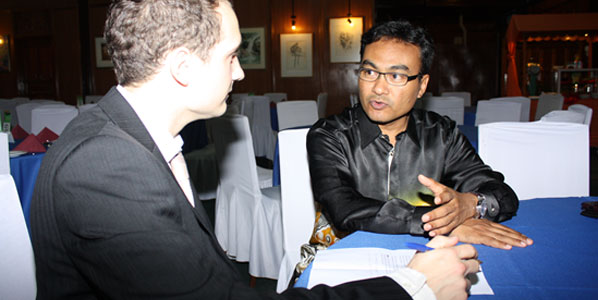 Sallauddin is lavishly entertained at an empty banqueting table by anna.aero’s Ryan Ghee. If you enjoyed seeing the back of Ghee’s head in last week’s 30 Second Interview with AirAsia, here’s a refreshing side angle.

anna.aero: has positioned itself as the ‘Next Generation Hub’ – a premier airport that will enable passengers to connect seamlessly amongst all types of carriers to all destinations served from KLIA. How serious are you about this connectivity and how do you aim to fulfil the status of ‘Next Generation Hub’?

Sallauddin: Passengers already connect between the main terminal and the LCCT every day. Because of that we have seen the opportunity to be one of the first airports to formally embrace this market force. KUL is an airport where the two categories of airlines are both growing constantly and as the airport we’re in the privileged position to cater to the needs of both low-cost and full service carriers. We want to become an enabler and that’s why we’ve also created the portal – www.flyklia.com. In a way, we’re empowering the passenger because we’re giving them the connection choice.