Bangkok Airways was the main sponsor of the Samui Island Marathon 2010, which was held in September. Among the people celebrating the race was Bangkok Airways’ President Puttipong Prasarttong-Osoth (centre) and Peter Wiesner, SVP Network Management (third from left). M.L. Nandhika Varavarn, the airline’s VP Corporate Communications and Chairman of the Race Committee, showed the winner’s medal.

Bangkok Airways, which ranks third in the Thai market after Thai Airways and AirAsia Group, labels itself “Asia’s Boutique Airline”. The full-service regional carrier was Thailand’s second-largest airline until 2006, when the low-cost carriers in AirAsia Group surpassed. 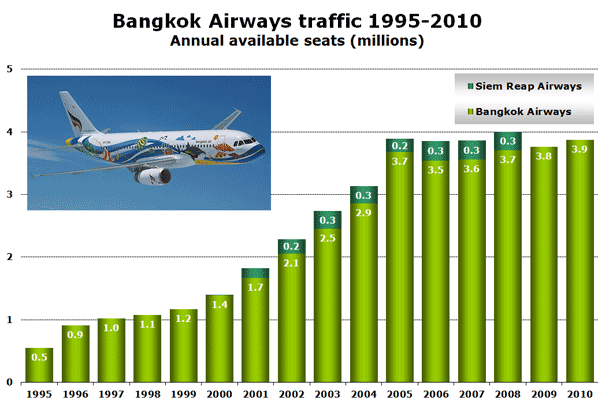 In the early 2000s, Bangkok Airways grew very aggressively and it more than doubled its seat capacity. However, in the second half of the last decade, the capacity offered by the airline has been more stagnant.

Between 2000 and 2008, Bangkok Airways had a Cambodian subsidiary, Siem Reap Airways. The airline had no own aircraft, but wet leased its full capacity from its Thai parent. However, as the Cambodian airline got blacklisted by the EU over safety concerns (which might be considered peculiar, since the operator Bangkok Airways was unaffected) in 2008, the airline was shut down. Because the airline did not serve the EU, only Cambodia and Thailand, and therefore was not directly affected, it seems that the bad publicity that hit the airline was sufficient for it to be closed down. 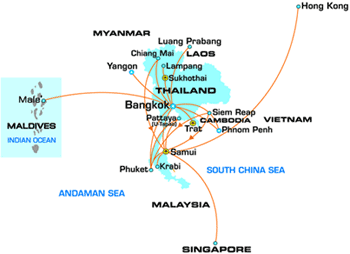 Since 2008, Bangkok Airways has radically changed its route network, downsizing internationally and focusing on the domestic and regional core market. Destinations dropped include all airports in mainland China, where the airline used to serve seven regional cities, as well as Macau. Ho Chi Minh City in Vietnam has been dropped as well as its both Japanese destinations; Fukuoka and Hiroshima. Conversely, in February this year, the airline added a daily domestic service from its Bangkok base to Lampang in the north of Thailand.

Domestic capacity now makes up 65% of the airline’s total, while services between Thailand and Cambodia contribute with another 21%. 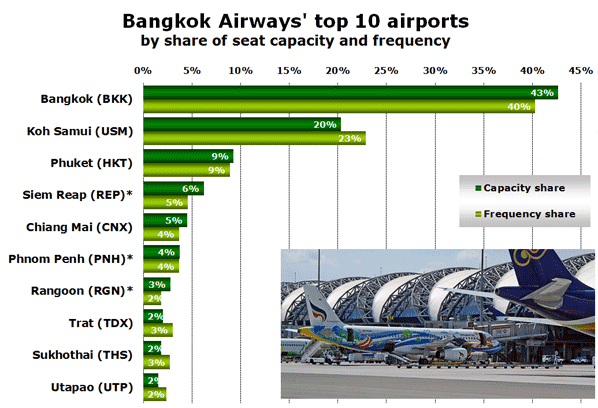 The airline owns three regional airports in Thailand; on the popular tourist island of Koh Samui, in the mainland town of Trat near the Cambodian border and in the northern town of Sukhothai. The airline has previously monopolised these airports, with a couple of minor exceptions. However, as of February 2008, Thai Airways also serves Koh Samui from Bangkok, although its twice-daily services stand up against Bangkok Airways’ between 12 and 18 daily frequencies. Later this week, the airline connects two of its airports, as it begins to fly ATR72s four times a week between Koh Samui and Trat, with the aircraft originating in Phuket.

Bangkok Airways began phasing out its 717s from early 2008. By the end of 2009, all four of the type were divested. The airline has instead ‘up-sized’ to focus its jet fleet around the A319 and A320 of which it now has six and three respectively. The airline’s main aircraft remains the ATR72, which it has eight of in its fleet. For the future, the airline clearly has ambitious expansion plans, intending to go long haul, which is revealed in its orders for four A350s that are estimated to be delivered from 2015.