September – a characteristically shy Ryanair chief executive opens the airline’s new base at Barcelona El Prat which has helped the Catalan capital to its superb 18% growth. At the other end of the growth scale, Dublin and Gatwick were finally able to generate a positive trend in demand of around 1% each in October.

Passenger traffic statistics for October show that 15 of Europe’s top 16 airports reported year-on-year traffic growth led by Barcelona (+18.1%), Copenhagen (+13.4%) and Rome Fiumicino (+11.6%). For the last few months, only Dublin, London Gatwick and London Stansted were not reporting growth, but in October both Dublin (+1.0%) and Gatwick (+0.8%) were finally able to generate a positive trend in demand. 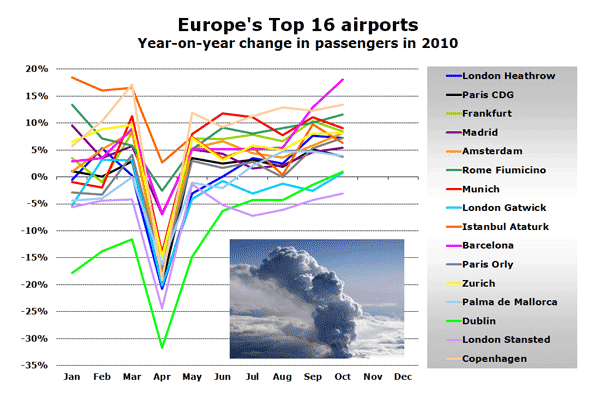 However, London Stansted, the biggest base for Europe’s biggest low-cost carrier (Ryanair), continues to lose passengers – although the decline is now less than 5%. Despite this, during 2010, the airport has seen new routes launched by easyJet to Cagliari, Bodrum, Dalaman, Dubrovnik and Split; by Ryanair to Ciudad Real, Fez, Figari, Fuerteventura and Trapani; by germanwings to Hannover; by Anadolujet to Istanbul Sabiha Gökçen, and by Sun Country to Minneapolis/St. Paul.

Barcelona benefits from new Ryanair base

Ironically, Barcelona’s surge to the top of the rankings is also down to Ryanair, which opened a base at the airport on 1 September. It immediately started serving 20 destinations (including 12 with at least daily frequency) with another four routes starting this winter.

To keep up with the latest monthly traffic data and trends for over 250 European airports, click here.