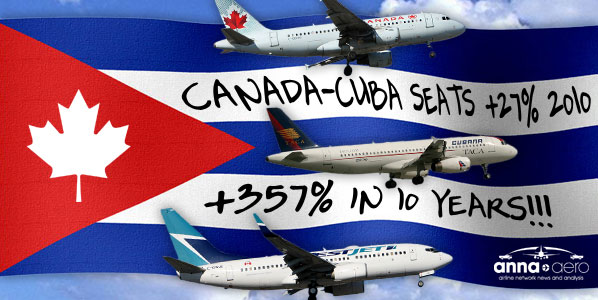 As things return to normal in the United States, with the workforce coming back from the Thanksgiving holidays, there is one nearby tourist destination where we can be fairly certain they have not been. However, to their northern neighbours the Canadians, Cuba is not such an odd place to go at all. 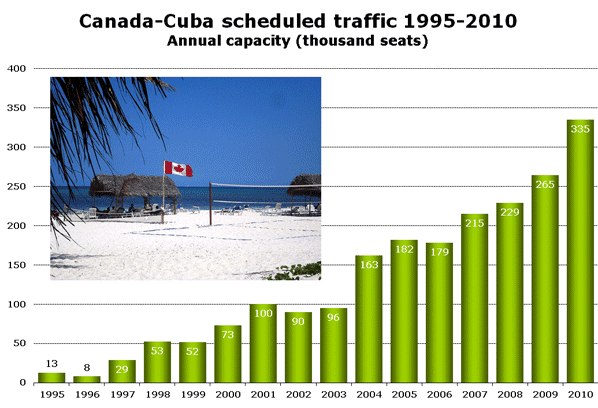 In the last decade, seat capacity between the two countries has grown 357%. Growth has been almost consistent, with only minor troughs after 9/11 and in 2006. In the last year alone, capacity grew by 27%, in spite of the bankruptcy of Skyservice, one of four carriers that operated on the country-pair this year.

The remaining three airlines, Air Canada, Cubana and WestJet, have all increased their capacity to compensate for the absence of Skyservice this winter season. In particular WestJet increases, growing by almost 75%. Still, the growth is not enough to cover the large gap created in the market.

This December, Air Canada leads the market with nearly a 50% share of offered seat capacity. The remainder is almost split equally between Cubana and WestJet with 27% and 24% respectively. Flights are offered to eight different Cuban airports. The main destination, with almost a third of all capacity, is Varadero, the resort town 100 kilometres east of Havana. In Canada, Cuban flights are offered from Toronto, Montreal, Halifax, Calgary, Ottawa, Quebec City and Vancouver, with 85% of the capacity on services from Toronto and Montreal alone.

Should the long-lasting political tension between the US and Cuba change, US sun seekers will have a new destination right on their doorstep, already tested and evidently approved by Canadians.