Condor adds Seattle to Calgary, Recife and Split as new destinations for 2011; 58 routes from Frankfurt in S11 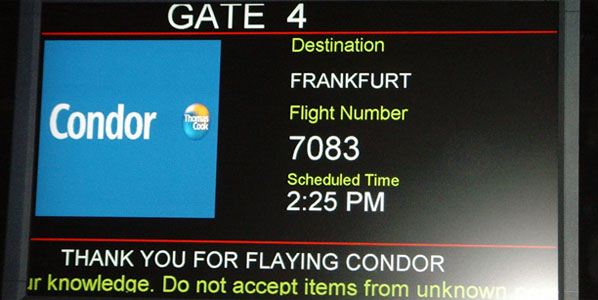 Condor moment: Taking the 'punishment' out of getting to 60 destinations from Frankfurt (where it is now #2 after Lufthansa).

German leisure carrier Condor (a wholly-owned subsidiary of travel giant Thomas Cook) has announced plans to make Seattle its latest destination, when it begins twice-weekly flights from Frankfurt next June. This summer, the route was served daily by Lufthansa. Seattle-Tacoma International airport is a hub for Alaska Airlines, a co-operation partner of Condor. Last year, passenger numbers at the airport in the state of Washington were 31.2 million, making it the 17th busiest in the US. In the first 10 months of this year, passenger numbers are virtually identical to last year.

Seattle now joins Calgary (Canada), Recife (Brazil) and Split (Croatia) as new destinations in Condor’s network for next summer. The carrier is the second biggest at Frankfurt (after Lufthansa) with a modest 4% share of seat capacity in September 2010 as determined from OAG data. According to the airline’s on-line timetable, Condor will be serving 58 destinations from Frankfurt next summer. These are summarised below by geographic region.

Back in the summer of 2006, Condor briefly operated a ‘City’ product from Munich with two A320s. Destinations included Barcelona, Brussels, Budapest, Genoa, Istanbul, Marseille, Naples, Pisa, Prague, Rome and Venice, with flights operating between three and seven times weekly. By the following summer, the network was cut to include just Barcelona, Istanbul, Madrid, Naples and Rome, before fizzling out at the start of the 2008 summer season.