India’s domestic air travel boom is cooling slightly. After reporting passenger growth of over 20% in the first half of 2010, domestic demand is up just over 10% in each of August and September, although October growth is reported to be back to almost 20%. Although the growth rate has apparently slowed, some of this is to do with the dip in traffic in 2008-09. Comparing 2010 passenger numbers with 2007, growth has been consistently between 12% and 22%. 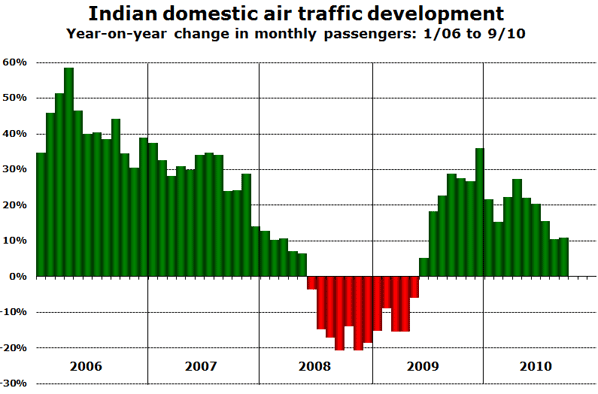 Treating JetLite and Jet Airways as separate airlines shows that four carriers continue to fight for the leading position in the Indian market. In October, four carriers each had between 17% and 19% of the domestic market with Kingfisher (19.0%) just clinging on to its lead over Jet Airways (18.8%), Indian Airlines (17.7%) and Indigo (16.8%). 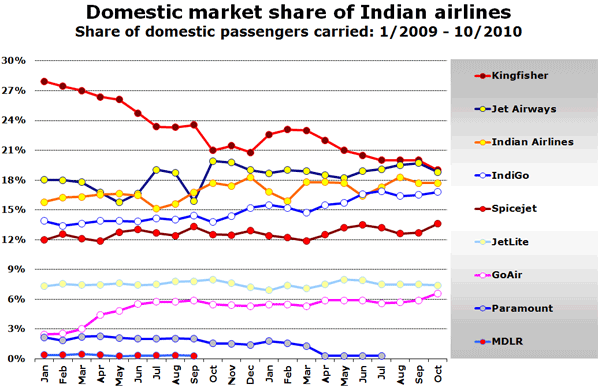 GoAir recorded its highest yet share of the domestic market in October at 6.6%. Last month, the airline (part of the Wadia Group) celebrated its fifth anniversary, so under Indian legislation, the carrier can now consider operating international routes.

International traffic up 12% this year

International traffic growth at Indian airports has been fairly consistent across 2010 at between 8% and 16%, averaging just over 12% between April and September. 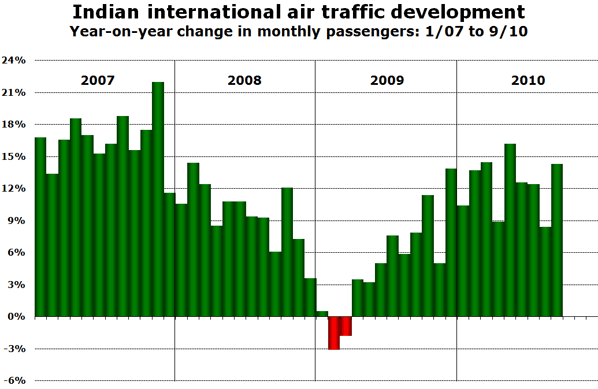 The biggest region for international traffic is the Middle East. Analysis of schedule data shows that Dubai is by far the leading destination (three times bigger than Sharjah based on seat capacity), served non-stop from 17 airports across India. Emirates is the dominant airline between Dubai and India followed by Air India Express. 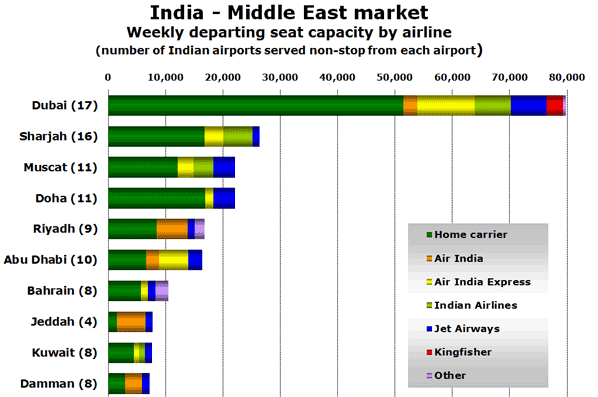 Sharjah is connected non-stop to 16 airports in India, thanks primarily to Air Arabia which serves 13 destinations in India from its base. The other regional ‘meg-hubs’ of Abu Dhabi and Doha rank sixth and fourth respectively for capacity to India, both beaten by Muscat in Oman. Oman Air serves 10 Indian airports non-stop while Air India Express, Indian Airlines and Jet Airways also operate non-stop services between the two countries.