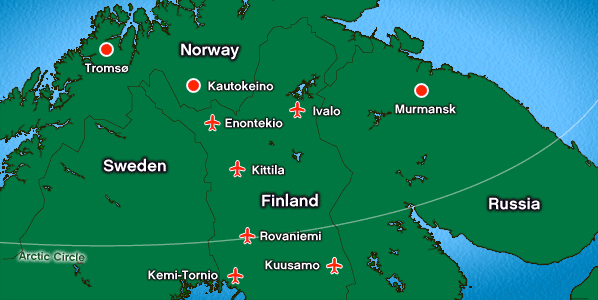 Lapland Airports comprise six airports in Northern Finland which are operated by the country’s airport organisation Finavia. The six airports handled almost 900,000 passengers in 2009 (down from just over one million in 2008) with December by far the busiest month with over 180,000 passengers. Each of the airports has its own appeal and target audience:

Not surprisingly traffic peaks around Christmas as the region is known as the home of Father Christmas. In terms of international traffic the United Kingdom is the leading country market at all of Lapland’s airports except Kemi-Tornio where visitors from Germany lead the way. Lapland Airports is aiming to repeat the success of the UK market with other countries across Europe notably Germany and France. Yes, we've run this Christmas cake/tree photo story before (and we're getting a lot of comments for casting doubts on Riga Airport's claim that the Christmas tree is a Latvian invention). However, we totally agree that they make great cakes, including this one from November 10 for AirBaltic's new Riga-Kittilä link in Finnish Lapland (where Santa Claus lives). 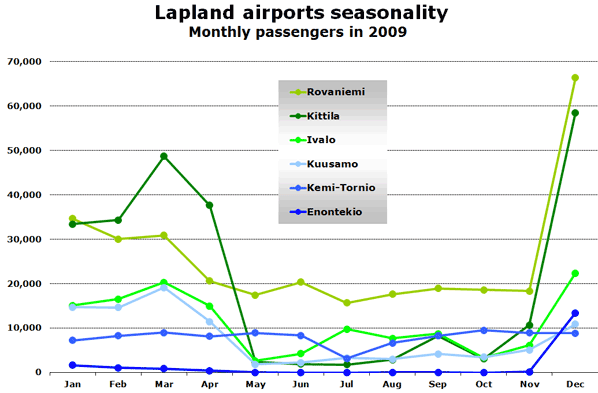 Most of the scheduled flights to these airports are domestic services from Helsinki, Finland’s capital, operated by a mix of Blue1, Finnair and Finncomm.

As the fourth busiest airport in Finland, Rovaniemi also has year-round flights operated by airBaltic to Tampere (in Finland) and Riga (in Latvia). At the end of next March when Norwegian opens its new base in Helsinki, there will be daily flights to Rovaniemi. Charter flights from a variety of UK airports will be provided once more this winter by Thomas Cook, Thomson and Jet2.com, while Edelweiss operates from Zurich, and Wizz Air offers flights from the Czech Republic, Hungary and Poland.