Route of the Week:
Hainan Airlines’ Beijing to Toronto Lloyd McCoomb, President and CEO of Greater Toronto Airports Authority, exchanged gifts with Hainan Airlines’ President Wang Yingming to celebrate the new Beijing-Toronto route. The Canadian Prime Minister Stephen Harper, although not physically able to attend, congratulated Hainan Airlines on the launch in a special congratulation letter, pointing out that it suitably now also is the 40th anniversary of diplomatic relations between Canada and China.

Cake of the Week:
British Airways’ London Heathrow to Gothenburg In connection with the route launch, BA had a real double-decker bus travel around the city of Gothenburg (also known as ‘Little London’) playing music by the Beatles, promoting the new route to weekend shoppers who were handed flyers and had the chance to win free flights.

The rest of the week’s new routes 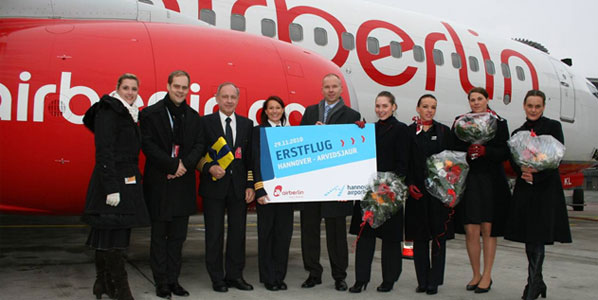 Celebrating the launch of twice-weekly services to Arvidsjaur in northern Sweden from Hannover Airport are Anika Gerstenkorn from the airport’s communications department, airberlin’s station manager Kristof Böttcher and Claus-Peer Zeise (centre), airberlin sales, as well as the airberlin crew. Kim Jae-kun (front left), the CEO of Jin Air, and guests from the air travel industry handed flowers to the crew as the low-cost carrier first flew to Macau. The overnight service from Seoul Incheon competes with Air Macau. Shanghai Airlines last week launched daily flights from Shanghai Pudong to Tangshan. Welcoming the first flight at Tangshan Airport (which only opened in July) are Yang Logbo, commissioner of Tangshan Transport Agency; Xin Zhichun, deputy mayor of Tangshan City; and Liang Yongchang, chairman of China Eastern Airlines’ Hebei Office. Notably, the airline has not yet repainted the aircraft to reflect that it no longer is a Star Alliance member. 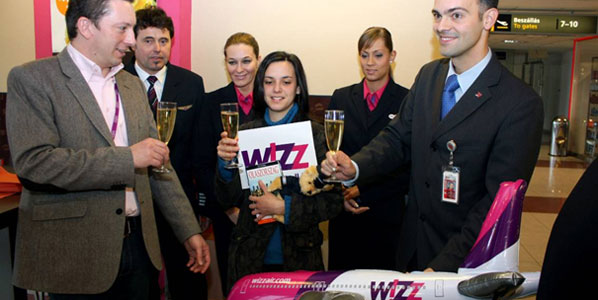 Wizz Air welcomed its millionth passenger for 2010 at Budapest Airport; 19 year old student Lili Anna Marton, who was on her way to Milan. Along with the crew, Balazs Varro, Wizz Air’s head of communications, and Patrick Bohl, Budapest Airport’s head of aviation development, welcomed the surprised passenger who enjoyed a glass of champagne and received gifts, including a free return ticket for future use. As the Mexican ultra low-cost carrier vivaaerobus celebrated its fourth birthday with this cake made from cupcakes, the airline also took the opportunity to launch the Christmas present of the year (?) – the airline’s 2011 cabin crew calendar. Proceeds go to Alianza Anticáncer Infantil, a children’s cancer charity.