jetBlue’s Boston route was the most recent US service to launch to St Maarten. The captain of the flight was welcomed with a commemorative gift, as the reflection of the Caribbean Sea provided the backdrop.

On the Caribbean island of St Maarten, which is divided between the southern Dutch half (Sint Maarten, part of the Netherlands Antilles) and northern French half (Saint Martin, part of France), one airport overshadows the other. While L’Espérance Airport on the French side offers some flights within the French Caribbean, the island’s air traffic is dominated by the much larger Princess Juliana International Airport on the Dutch side, which ranks as one of the largest airports in the region. The airport is not the least famed for being a favourite among plane spotters who appreciate the spectacular view of approaching aircraft – including large jets – right above the heads of sunbathers at Maho Beach, just off the airport perimeter. 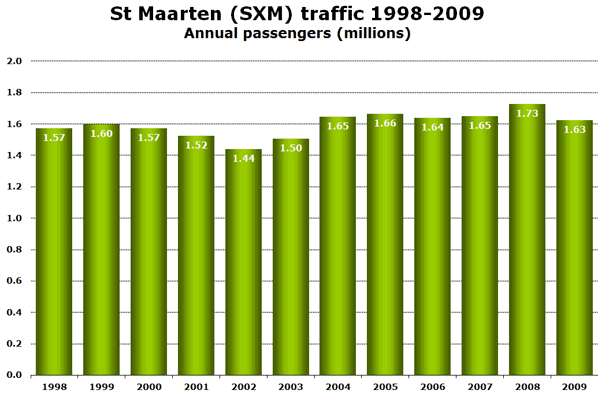 Over the last decade, passenger numbers at the airport have been relatively stagnant. 9/11 did, as expected, have an impact. A decline took place, but the airport quickly recovered beyond pre-9/11 levels and in 2008, a year when economic turmoil was reflected in most other airports’ throughput, St Maarten experienced a record year. Last year, numbers retracted back to previous levels.

Flights within the surrounding Leeward Island region make up the largest share of St Maarten’s total seat capacity. The runner-up region is North America, which is heavily dominated by US services. By contrast, Canadian services are surprisingly few. WestJet and Air Canada only fly from Toronto.

Central America is an upcoming market that only just will be starting when Copa Airlines launches twice-weekly services from Panama City on 18 December. The last Latin American route to St Maarten was Aserca’s Caracas service, which was dropped in 2000.

Other than Copa’s entry to the market, new routes at St Maarten have been scarce in later years. jetBlue, which launched serves from New York JFK in January 2008, added its second destination – Boston – in February 2009. WestJet began flying from Toronto in November 2009. Within the Caribbean, the last route to launch was BVI Airways from Tortola in the British Virgin Islands, which began at the start of the winter season. Insel Air began flying to San Juan in Puerto Rico in April 2009.

Local Winair just ahead of LIAT; Paris market much larger than Amsterdam 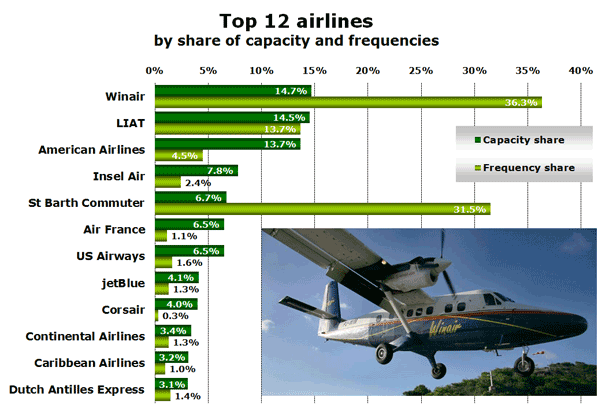 Winair and St Barth Commuter stick out for having such a high proportion of the airport’s frequencies. Both airlines operate short, inter-island routes with small commuter aircraft. In St Barth Commuter’s case, it flies the 30-kilometre route from Saint Barthélemy to St Maarten 28 times a day (in addition to 10 daily to L’Espérance Airport).

In spite of the political links with the Netherlands, KLM’s Amsterdam service only puts the airline in 13th position. The route, which the Dutch airline has operated since 1989, is currently flown three times a week, operating via Curaçao on the return to Europe. Conversely, Air France flies six times a week from Paris CDG in addition to Air Caraïbes’ and Corsairfly’s twice-weekly and weekly flights respectively from Paris Orly. It should be noted that, in spite of these high frequencies, the route is not a PSO, but the flights are commercially motivated.