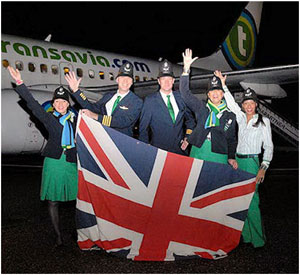 Bye bye. Transavia has left the UK after seven years.

Amsterdam-based Transavia.com (part of the Air France / KLM group) has revealed plans to broaden its network next summer from Amsterdam, Rotterdam and Eindhoven and add six new destinations. This follows an aborted attempt to develop a base in Copenhagen, which the carrier opened in December 2008. Most of the Danish network has now been closed, but routes to Faro, Gran Canaria, Innsbruck and Salzburg will operate until the beginning of April.

The new destinations from Amsterdam are Athens (served by KLM and Olympic Air this summer) and Lisbon (served by KLM and TAP Portugal this summer). From Rotterdam, there are new routes to Biarritz, Madrid, Milan Malpensa, Montpellier, Prague and Vienna. Of these, Madrid, Milan Malpensa, Prague and Vienna are new destinations for the airline. All of these destinations are served at least twice daily by KLM from Amsterdam. At Eindhoven, there are new routes to Barcelona, Ibiza and Nice.

Willem Hondius, Commercial Director of transavia.com, comments: “We are absolutely delighted with no fewer than six new destinations added to our network. These are very attractive leisure destinations. Flying from regional airports has also been expanded. We want to show our customers that it’s just not worthwhile spending a few hours driving into Germany or Belgium. transavia.com will be offering these destinations at very competitive prices, but service and attention to our customers remain our key priorities.”

No more flights to UK after over seven years

Despite all the growth, one significant market has been abandoned by the airline. At the end of the latest summer season, Transavia.com operated its last services to the UK. In May 2003, the airline first launched twice-daily flights from Amsterdam to London Stansted. In March 2004, these flights were re-allocated to Rotterdam from where they operated until the beginning of 2008. Then in October 2008, flights were re-started from Rotterdam but this time to London Luton, before moving a year later to London Gatwick. Again, flights lasted just 12 months. Apart from serving London, there was also an Amsterdam – Glasgow Prestwick service that operated from March 2006 until October 2007.