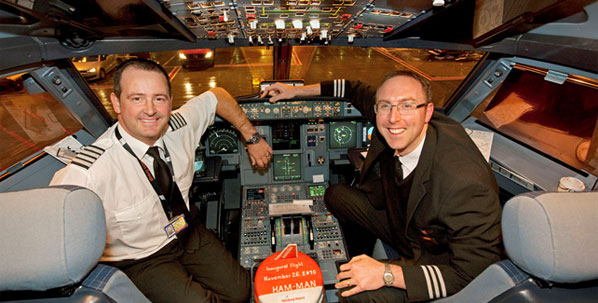 This week, easyJet launched two new routes between UK regional airports and Germany; Manchester-Hamburg (pictured) and Edinburgh-Cologne/Bonn. Lufthansa is still the market leader. Amazingly, British Airways operates no routes at all between Germany and any UK airport outside of London.

During the last week, easyJet has started two new routes from UK regional airports (those outside of London) to Germany. It launched daily flights between Manchester and Hamburg, and four times weekly flights between Edinburgh and Cologne/Bonn. So this week, anna.aero is taking a closer look at the history of demand between Germany and the UK’s non-London airports. 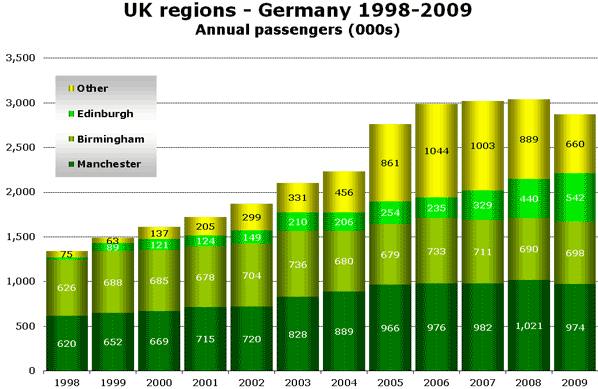 Back in 199,8 Birmingham and Manchester airports accounted for 93% of UK regional demand to Germany. However, since 2005, this share has fallen to 60% or less. Edinburgh has now firmly established itself as the third major regional gateway to/from Germany, developing from under 100,000 annual passengers in 1999 (when there were regular flights to just Düsseldorf and Frankfurt) to well over half a million passengers in 2009, thanks to the addition of services to Berlin Schönefeld (Ryanair), Bremen (Ryanair), Cologne/Bonn (germanwings), Frankfurt Hahn (Ryanair), Munich (easyJet) and Weeze (Ryanair).

Outside of the top three regional airports, demand grew rapidly from under 100,000 annual passengers in 1998 and 1999 to over one million in 2006 and 2007 as a variety of low-cost carriers started connecting other airports such as Bristol, East Midlands, Liverpool, Newcastle and Prestwick to various German cities. 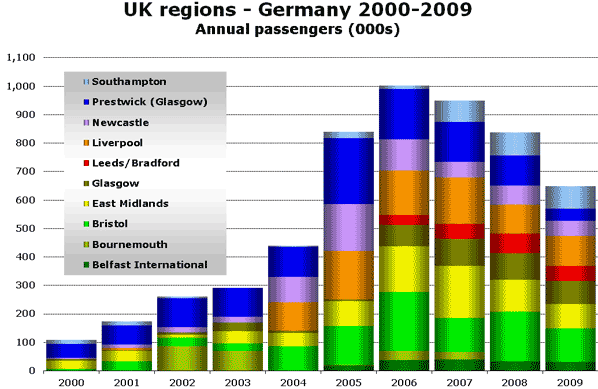 For several years, Glasgow Prestwick was a major contributor thanks to Ryanair’s services, but many of these have been moved in recent years to Edinburgh. In 2004, easyJet began flights from Liverpool to Berlin and Cologne/Bonn, helping that airport to become a key player in the German market, at least until Cologne/Bonn flights were axed in January 2008.

Bristol, another easyJet base, also saw a boom in German traffic thanks to the airline starting Berlin flights in 2004, followed by Hamburg flights in 2005. However, the Hamburg flights were dropped in 2006, as were BA services to Frankfurt and Munich when BA Connect was sold to Flybe. Although Lufthansa replaced BA on the Frankfurt route, they pulled off the route at the end of April 2009.

In 2007, East Midlands ranked fourth among the regionals for German flights thanks to Ryanair flights to Berlin and easyJet flights to Cologne/Bonn. However, easyJet abandoned the Cologne/Bonn route in early 2008 and was replaced by bmi regional using much smaller aircraft.

Capacity data for this summer shows that Manchester is still the biggest regional market, although Edinburgh has almost caught Birmingham. There were 13 UK regional airports with non-stop flights to Germany this summer provided by a total of nine different carriers.

In terms of both flights and seats, Lufthansa was the leading carrier in this market in August with 48% of flights and 43% of seats. Flybe is next with 25% of flights and 17% of seats, followed by Ryanair (16.5% of seats) and easyJet (12.2% of seats). One airline completely absent from this list is British Airways, which now operates primarily domestic routes from UK regional airports, assuming it has any presence at all.