This summer, easyJet celebrated the fifth anniversary of its base in Basel in Switzerland, although flights to the airport were started from Berlin, Liverpool and London as far back as 2004. This week saw the start of services to four new destinations (Dresden, Edinburgh, Gran Canaria and Tel Aviv), bringing the number of routes the airline has served during its time operating at Switzerland’s third biggest airport to 38. The Dresden route is of particular significance as it is easyJet’s first route to this German airport.

This winter, easyJet is operating to 27 destinations with a further four (Ajaccio, Cagliari, Olbia and Split) only being served seasonally in summer. The seven airports no longer served are Liverpool, London Stansted, London Luton, Munich, Paris CDG, Prague and Rome Ciampino. However, London is still served by flights to Gatwick and Rome is still connected thanks to services to Rome Fiumicino. Munich is still served by Lufthansa, Air France has multiple daily flights to Paris CDG and Paris Orly and Swiss operates five-times weekly to Prague. 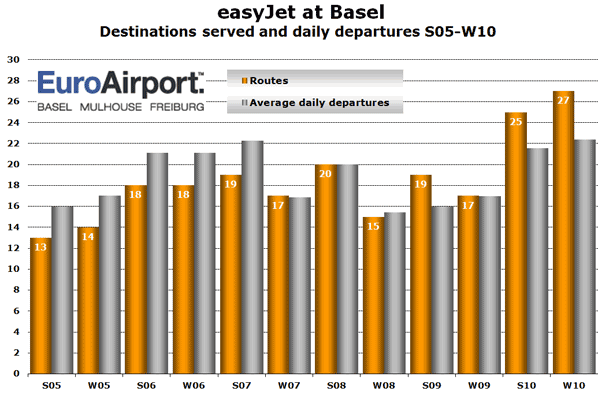 Although this winter sees easyJet serving more destinations than ever before from Basel, the number of weekly flights is virtually the same as back in the summer of 2007 when the airport had its busiest ever year handling just under 4.3 million passengers. In 2009, the figure had fallen to 3.85 million, but in the first 10 months of 2010 passenger numbers are up once more by 6%. Jürg Rämi Director EuroAirport Basel-Mulhouse-Freiburg explains how this week saw the start of services to four new destinations – Edinburgh, Gran Canaria, Tel Aviv and Dresden (a first for easyJet). Meanwhile the Scots take the party around the terminal....more pictures of this week’s EuroAirport launches tomorrow!!!

Competition on eight of 27 routes this winter

Closer inspection of schedule data reveals that easyJet faces direct competition on seven routes this winter, plus indirect competition on the London route. Swiss only competes head-to-head on two routes (Barcelona and Hamburg) though it also competed on the Amsterdam route until the start of the summer season. The airline’s busiest route to Berlin Schönefeld will come under pressure next February when airberlin begins operating twice-daily flights from Berlin Tegel.

This network means that easyJet is by far the biggest carrier at the airport in terms of weekly seat capacity. Few of Europe’s other LCCs currently serve the airport though Iceland Express operates weekly flights to Reykjavik in summer.

Ryanair has served Basel starting back in October 2007 but all flights were axed in December 2009. During those two years the airline had operated flights from its bases in Alicante, Cagliari, Dublin, Girona, London (Stansted), Marseille, Porto, Stockholm (Skavsta) and Valencia.