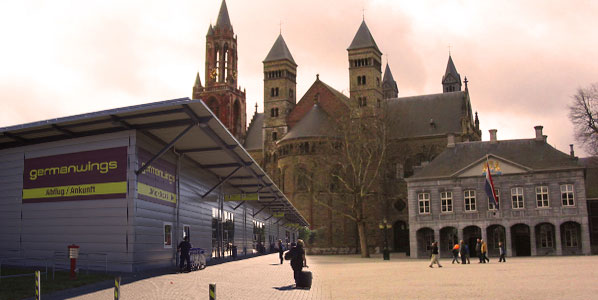 The 'low-cost' terminal at Berlin Schönefeld gets closer to Maastricht in the Netherlands next year. germanwings has decided to re-allocate two of its Cologne/Bonn flights to the airport close to the Dutch border to save passengers having to pay the new €8 'eco tax' that comes into effect on 1 January.

Lufthansa’s in-house LCC germanwings has confirmed plans to start services from Maastricht airport in the ‘tax-free’ Netherlands starting next summer. Two of the airline’s current eight daily flights between Berlin Schönefeld and Cologne/Bonn will be re-directed to Maastricht Aachen Airport (as the airport is officially known) about 100 kilometres away, where passengers departing the airport will be spared the €8 tax applicable at German airports starting from 1 January. germanwings is not the first airline to operate btween Berlin SXF and Maastricht. Back in April 2005, easyJet started double-daily flights between the two airports, before reducing frequency to daily and finally abandoning the route in January 2007.

As part of its marketing, germanwings is promoting flight connections from Maastricht via Berlin to Istanbul, Izmir, Moscow, Split, Stockholm and Stuttgart. The last of these is slightly bizarre as the total journey time by air from Maastricht on certain days of the week is around seven hours due to a slow connection in Berlin. In fact, only on a Thursday could a passenger manage a day return and then they would have just three hours between arriving in Stuttgart and the departure of the return flight (via Berlin). Maastricht Aachen and Stuttgart airports are just 350 kilometres apart suggesting that the legendary German autobahn network may be a better bet on that route.

Maastricht Aachen Airport manages to have its catchment area include both Dutch and German towns and cities, but according to germanwings’ website the airport is actually located in the United Kingdom! (something that will no doubt be corrected shortly …) 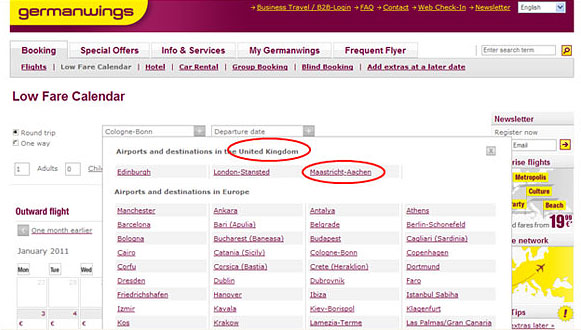 Last year, passenger numbers at Maastricht Aachen Airport were just under 200,000, having fallen by 30% compared with 2008. However, in the first 10 months of 2010 demand is up over 30%. This summer, scheduled services from the airport consisted of Ryanair flights to seven Mediterranean destinations; Alicante, Girona, Malaga and Reus in Spain; Pisa and Trapani in Italy; and Faro in Portugal. Porto flights began in early November.