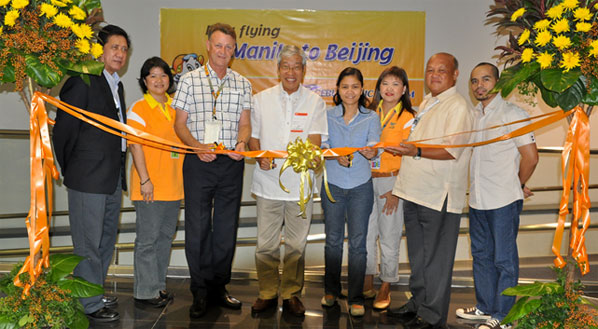 According to ACI, Manila’s Ninoy Aquino International Airport was ranked only just outside the Top 50 of the world’s busiest airports in 2009, handling just over 24 million passengers. Since 2001, traffic at the busiest airport in the Philippines has grown by almost 90%, driven primarily by a growth in domestic demand. This has been supported by the rapid growth of Cebu Pacific, a low-cost airline which now operates to more domestic destinations from Manila than Philippine Airlines. 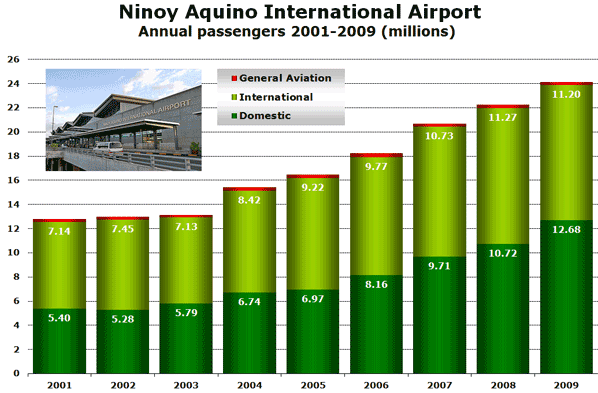 In 2009, while airport traffic as a whole grew by 8%, domestic demand surged by 18% while international traffic fell by under 1%. Philippine Airlines and Cebu Pacific are the airport’s two dominant carriers accounting for almost 60% of all flights and scheduled seat capacity. While Cebu Pacific offers a wider range of domestic destinations, Philippine Airlines offers a greater choice of international destinations.

Around 70% of flights and 55% of seat capacity at Manila is dedicated to domestic services. The leading international markets for non-stop services are Hong Kong and Singapore, followed by Japan and Korea. The Singapore market is particularly competitive as it is served by Airphil Express, Cebu Pacific, Jetstar Asia, Philippine Airlines, Singapore Airlines and Tiger Airways. Each of these carriers operates between one and four daily flights. 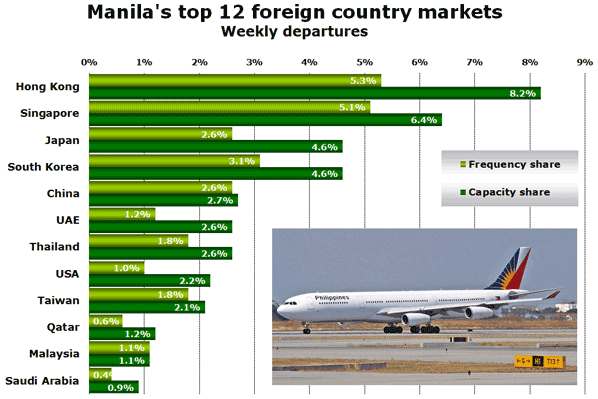 A total of 34 airlines operate scheduled services at the airport this winter. All three ‘MEB3’ carriers are present serving their hubs in Abu Dhabi, Doha and Dubai with double daily flights. Three US carriers also serve the airport; Delta operates flights from the US via Nagoya and Tokyo in Japan, Continental has daily flights to Guam while Hawaiian Airlines (not surprisingly) serves Honolulu. For non-stop flights to the US mainland Philippine Airlines offers daily flights to both Los Angeles and San Francisco. The only European carrier present is KLM which offers daily non-stop flights to Amsterdam.

During 2010, several new services have been started by airlines the most significant possibly being the addition of two more carriers on the Beijing route, previously a monopoly for Philippine Airlines. At the end of March Air China began operating three weekly non-stop flights and was joined at the beginning of September by Cebu Pacific which also started three weekly flights.

Other recent service additions have been Cebu Pacific to Brunei (21 August), Airphil Express to Zamboanga (1 October) and Singapore (27 October), Tiger Airways to Singapore (31 October), and Jeju Airlines to Seoul Incheon (24 November). All of these new routes suggest that when ACI releases its figures for 2010 Manila may indeed now be one of the world’s 50 busiest airports.

New routes already announced for 2011 include ANA to Tokyo (service resumption), Jetstar to Darwin, and Philippine Airlines to Delhi.