Do You Know the Way to San Jose?* – it’s from San Jose! Alaska Airlines began flying from San Jose, California to San Jose del Cabo on 4 December. Now that Mexico has been upgraded back to FAA Category 1, US airlines can again codeshare with Mexican carriers, who also are able to launch new services to the US. (*1968 Burt Bacharach song performed by Dionne Warwick)

So what has been the impact on the Mexican market of the collapse of Mexicana back at the end of August? On the basis of traffic figures from DGAC in Mexico, the answer would appear to be surprisingly little. Between June and August, domestic traffic was up around 3% on a year-on-year basis. In September, traffic was down 2% and in October less than 1%. Considering that for much of 2010, Mexicana and its affiliates MexicanaClick and MexicanaLink had a combined market share of almost 30%, this relatively modest fall in demand is surprising. 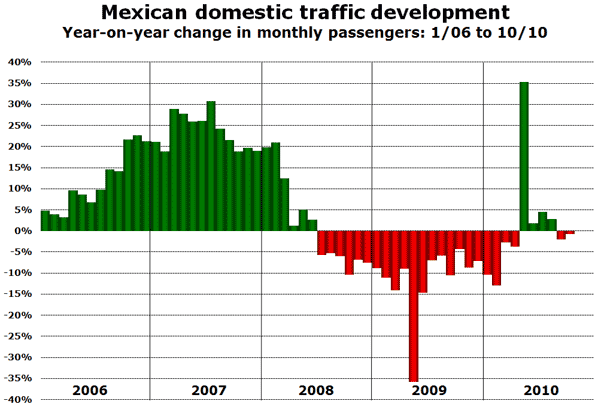 Even if total demand did not change as much as expected, individual airlines have seen a significant change in their domestic market share. Aeromexico appears to be the biggest winner. From having a 30% share of the market in June (when combined with Aeromexico Connect), its combined share has risen sharply to just over 45% in both September and October. 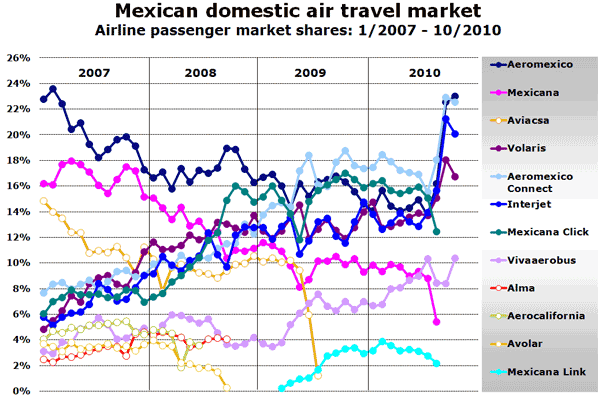 Among the three major LCCs (Interjet, vivaaerobus and Volaris), Interjet has made the biggest market share gains, growing from 13% in June to more than 20% in both September and October. Volaris’ share has grown from around 14% in June to 17% in October, while vivaaerobus has grown only marginally from 9% in June to 10% in October.

Mexicana’s demise has been felt rather more in the international market. Although demand was still up year-on-year in both September and October, it was at a much slower rate than compared with last year. However, some of 2010’s figures are distorted by the swine flu outbreak in 2009. If this year’s data is compared with 2008, the underlying trend (demand down about 5%) remains virtually unchanged despite Mexicana’s disappearance. 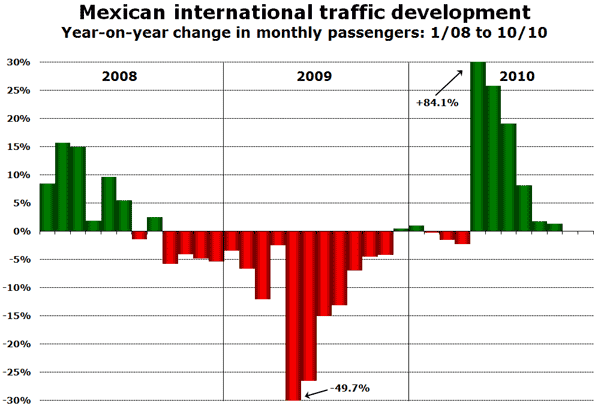 Some of the international services to/from Mexico that have already started (or will soon) are summarised in the table below.

With the notable exception of British Airways’ recently started new London Gatwick to Cancun service and Aerolineas Argentinas’ service from Buenos Aires starting in March, all other international services are to/from either Canada or the US.

Virgin America will be the newest US carrier to head across the border when it starts serving Los Cabos later this month, followed by Cancun early in 2011. This marks the carrier’s second international market, having earlier this year started serving Toronto in Canada.