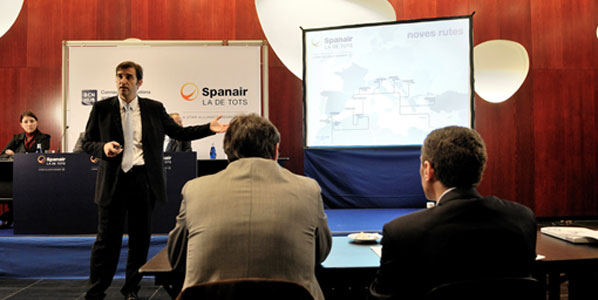 Spanair Chairman Ferran Soriano explains the new Barcelona base routes in February. The only double-daily service between Spain and Sweden this summer was offered by Spanair between Barcelona and Stockholm Arlanda...although overall the Scandinavian market has been very positive this year for Spain. Ryanair has grown strongly from all three countries, not the least Norway where it has its new Oslo Rygge base. Norwegian and City Airline have also contributed, while SAS and Iberia slowly seem to be withdrawing from the market.

Passenger numbers at Spain’s airports in the first 10 months of this year are up by 3%. This week, instead of looking at which airports are growing (and by how much), anna.aero takes a closer look at individual country markets across all Spanish airports to see which are growing and which are shrinking. The extensive Spanish domestic market has shown only marginal growth this year, up 1.5%. The biggest international market, the United Kingdom, has seen traffic fall 5.5% so far this year for a variety of reasons. These two markets alone account for 55% of all traffic at Spanish airports. 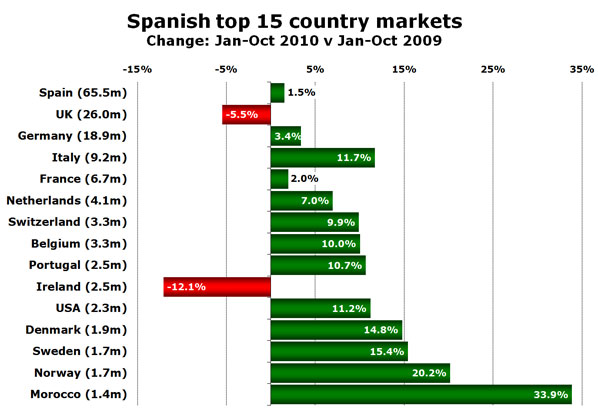 Fortunately, outside of these two largest markets there has been plenty of growth. Of the remaining 13 country markets in the top 15, all but one (Ireland) have seen an increase in demand in 2010 compared with 2009, with seven of the 13 reporting double-digit growth. Maybe not surprisingly the fastest growth has come from some of the smaller markets with Morocco (+33%) leading the way, followed by Norway (+20%), Denmark and Sweden (both up 15%). Total growth among the leading 15 country markets is 2.2% which indicates that some smaller markets have been growing much faster to generate overall growth of 3%.

Two country markets, Qatar and Slovakia, have seen demand more than double during the last year. The Qatar (Doha) market has grown thanks to Qatar Airways launching daily flights to Barcelona on 7 June this year and also increasing frequency on the Madrid service from four to seven weekly flights. The Slovak (Bratislava) market has doubled in size thanks to Ryanair which has complemented its existing Girona service (which started in November 2007) with additional routes from Alicante (twice-weekly from June 2009), Palma de Mallorca (four-times weekly since May 2010) and Malaga (twice-weekly from June 2010).

Other country markets that have seen growth of more than 30% include Malta (+57%), Latvia (+45%), Croatia (+43%), Russia (+41%) and Poland (+35%). At the other end of the rankings are those countries showing the sharpest decline in demand. So far this year these are Ecuador (-19%), Cuba (-16%) and Dominican Republic (-13%). The fall in demand in each of these markets can be attributed primarily to the collapse of Spanish long-haul carrier Air Comet just before Christmas last year.