Biggest French airports nearly all growing in November; domestic traffic up at Paris CDG but down at Paris Orly 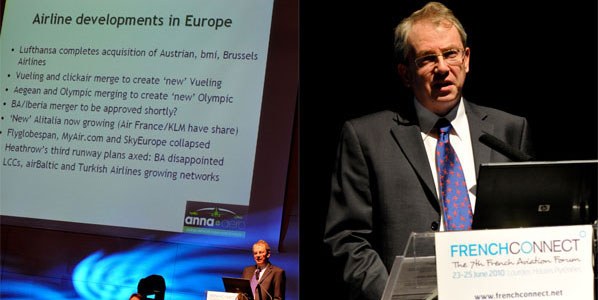 anna.aero’s editor Ralph Anker will again speak at FrenchConnect in Lille in March 2011, for which anna.aero is also delighted to be official media partner.

November data for France’s busiest airports shows that all of those that have reported so far (with the exception of Bastia) have seen traffic growth compared with November 2009, including Lille and Montpellier who reported traffic drops in October. The major airports that have yet to report November data all grew in October demonstrating that despite the occasional disruption from industrial disputes French airports are performing well in the second half of 2010. 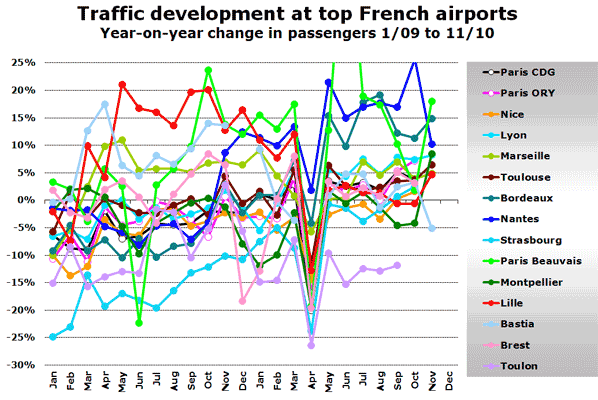 During the last 23 months the monthly prize (if there was one) for the fastest-growing of the top 15 French airports would have been awarded 10 times to Paris Beauvais, six times to Lille, four times to Nantes, twice to Bastia and once to Bordeaux.

Passenger numbers in 2010 on the top 15 French domestic regional routes (those not involving Paris CDG or Paris Orly) shows that 10 of the 15 routes have not grown in 2010 while on two routes growth has been less than 2%. 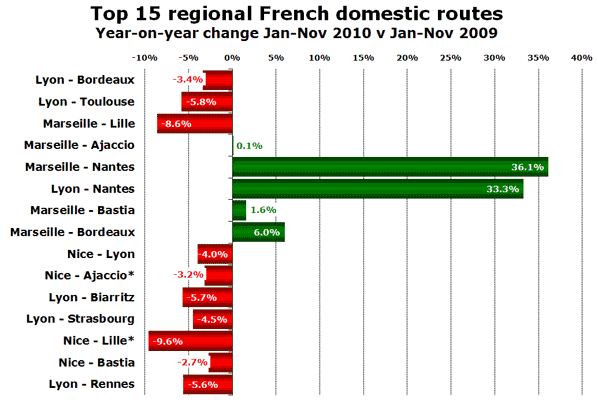 Two routes have grown significantly on a year-to-date basis; Marseille – Nantes traffic is up 36.1% while Lyon – Nantes is up 33.3%. The Marseille – Nantes route was an Air France monopoly until Ryanair entered the market with daily flights in March 2009. This increased to double-daily flights in the winter of 2009 and has remained at that level since. However, as part of the airline’s decision to stop basing aircraft at Marseille in 2011, this route will end on Monday 10 January 2011, reverting back to an Air France monopoly.

The Lyon – Nantes route was also an Air France monopoly until easyJet entered the market with daily flights in November 2009. These have been maintained through until the current winter season.

Data from French airports shows that the four busiest domestic routes to and from Paris airports have all seen a drop in demand in 2010. Looking at year-to-date figures for the four leading airports with high volume connections to Paris, all four report a fall in demand to Paris Orly (the bigger of the two markets), but three of the four show growth on flights to/from Paris CDG.

Overall domestic traffic at Paris’ two main airports is down 2.6% (January to October) according to statistics reported by Aéroports de Paris.