Jim goes to market: Flybe’s CEO Jim French with LSE Chief Financial Officer Doug Webb at this month’s $100m IPO. Flybe is the biggest airline by far in the UK domestic market, operating almost three times as many flights as any other. New international routes announced for next summer include Exeter to Düsseldorf, and Southampton to Beziers, Clermont-Ferrand and Pau.

Exeter-headquartered Flybe recently decided that now was a good time to finally launch an IPO. Last Friday, it raised over £60 million ($100m) by issuing over 20 million new shares which represent 28% of the airline’s total. With its fleet of 68 aircraft (14 E195s and 54 Q400s) spread across 16 UK bases, Flybe is the leading airline in the UK domestic market, operating almost three times as many flights as any other airline, and carrying over one quarter of all UK domestic passengers. If the flights of Loganair (which has operated as a franchise carrier for Flybe in Scotland since October 2008) are added in then Flybe branded flights have a 40% share of the UK domestic market.

In 2009, the number of passenger on flights operated by Flybe fell slightly to just over 6.7 million, with an additional half million flown on Loganair flights. To compensate for the downturn in the UK market in 2009 Flybe wet-leased four Q400s to Olympic Air for a period of just over a year starting in the summer of 2009. 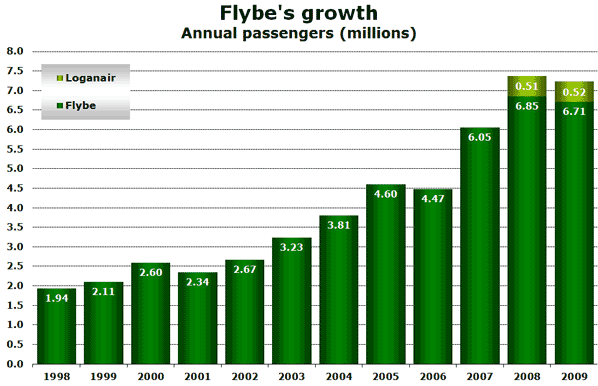 The annual average load factor fell below 50% in 2001, but has since 2003 consistently been between 60% and 70%. During 2010, underlying passenger demand has seen modest growth, except in those months where bad weather (January) and the effect of the Icelandic volcanic eruption (April and May) have disrupted operations. 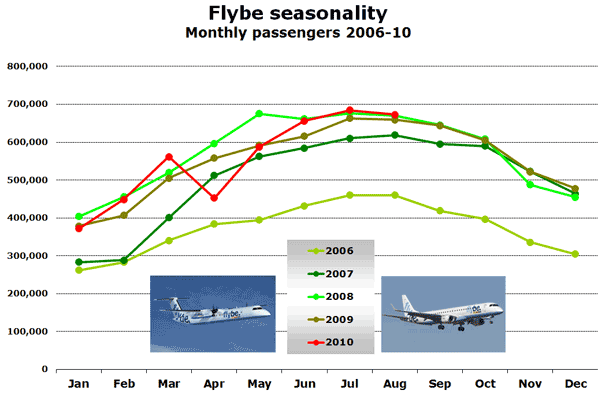 The acquisition of British Airways Connect in 2007 gave Flybe’s passenger numbers a major boost and resulted in a range of new international destinations that Flybe had not previously served.

Southampton biggest base and most routes this winter

Analysis of the airline’s weekly seat capacity during a typical week in each of the last three operating seasons shows that Southampton is still clinging to its position as the airline’s leading base of operations, both in terms of network spread and weekly seat capacity. Belfast City, which was ranked only fifth last winter, has now emerged as the biggest threat to Southampton. This is due to the (re-)launch of services to Bristol, East Midlands and Liverpool this winter, following Ryanair’s decision to abandon the airport for operational reasons. 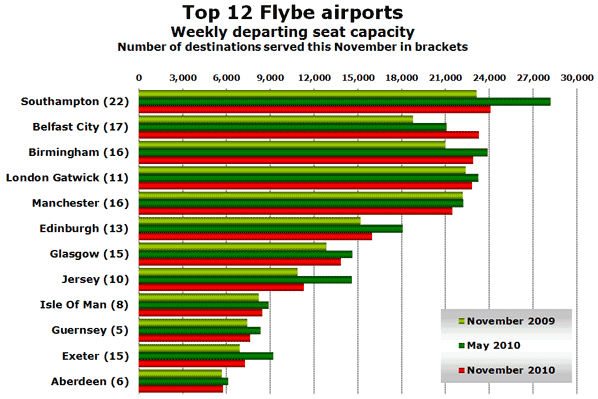 All of the airline’s top 12 airports are in the UK. The leading non-UK airports served this winter are Paris CDG (13th) and Düsseldorf (17th). Analysis of OAG data for November shows that including the Loganair franchise operation Flybe operates 126 routes spread across 54 airports. This will increase in December and early next year when a number of seasonal ski routes are re-introduced.

Almost 80% of capacity on domestic routes

This winter, almost 80% of scheduled seat capacity is on UK domestic routes, with routes to France and Germany accounting for a further 15%. Other country markets served year-round include Belgium, Ireland, Italy, Netherlands, Portugal and Spain. Croatia is served during summer only while Austria and Switzerland get winter-only ski flights. New routes started in 2010 by base are summarised in the table below.

New routes so far announced to start next summer include Exeter to Düsseldorf, and Southampton to Beziers, Clermont-Ferrand and Pau.