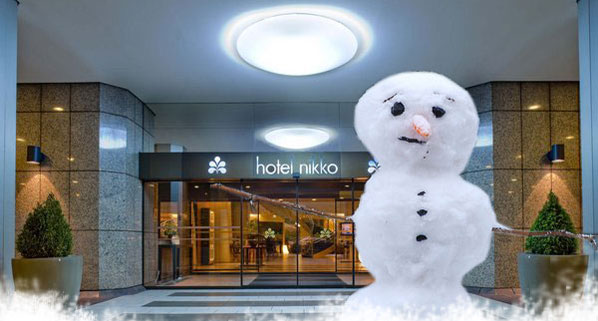 We were invited to attend Michael O’Leary’s press conference yesterday in Düsseldorf about the German cutbacks, but heavy snowfall cancelled the conference. Düsseldorf Weeze stayed open, so Ryanair could keep cashing in on passengers and save up for the presumably hefty no-show bill from the un-Ryanairesque 5-star Hotel Nikko where the event was supposed to take place.

To the surprise of very few people Ryanair followed through this week on its threat of axing further capacity from the German market, as a result of the government’s imposition of new taxes on air travel starting in January. Having already announced in October that it would cut nine routes and around 30% of flights at its Frankfurt Hahn base, it has now revealed another 24 routes that will be axed next year. Three further routes will go at Berlin Schönefeld (in addition to the already announced Frankfurt Hahn route), nine routes will be dropped from Bremen, and 13 routes will be dropped from Weeze (Düsseldorf). Including the original Hahn cancellations the country markets that see the most routes terminated from Germany are Poland (seven routes) and Spain (five routes). Italy and Lithuania will each be deprived of three Ryanair routes from Germany. 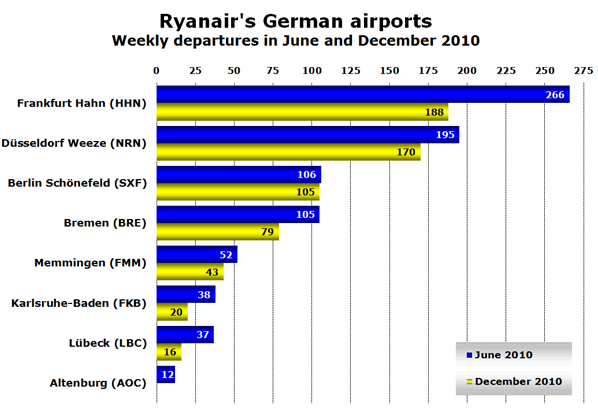 A comparison of Ryanair’s flights from its German airports in June and December this year shows that this winter the airline is already operating 23% fewer flights, but much of that is related to seasonality issues. The key statistic will be to see how many flights are being operated from each German airport in June 2011. Based on Ryanair’s announcements so far it is safe to say that capacity next June in Germany will be down at least 25% and most likely over 30%. Altenburg looks as though it may join Friedrichshafen as an airport no longer served by Ryanair. Although routes to London Stansted and Barcelona Girona are still listed in the airline’s on-line booking tool anna.aero has been unable to find any dates when flights actually operate.

Berlin flights cut by half

The biggest change has been at Berlin Schönefeld (which is not actually a base for Ryanair) where the carrier has decided to axe three domestic routes all of which are served twice daily resulting, along with other changes, in a capacity cut at the airport of over 50%. Given the on-going high-profile debate about airport charges (and operational issues) surrounding the new Berlin Brandenburg International (which is due to open in June 2012) Ryanair may consider this a good time to re-assess its future in this part of Germany.