Flower power!!! North Atlantic growth of over 11% in 2010 is partly the result of Swiss launching non-stop flights to San Francisco at the beginning of June.

Switzerland’s busiest airport has had a good year with passenger numbers in the first 11 months of 2010 up 4.7% compared with last year. Assuming it has coped ok with the particularly harsh recent winter weather it should break its all-time record of 22.7 million annual passengers achieved in 2000, before the events of ‘9/11’ took their toll on the industry resulting in the demise of Swissair. Only the impact of the volcanic ash cloud in April, which cost the airport around 300,000 passengers, looks like preventing Zurich from breaking through the 23 million mark this year for the first time. With near neighbours Austria and Germany introducing travel taxes for 2011, Zurich may perform even better in 2011. 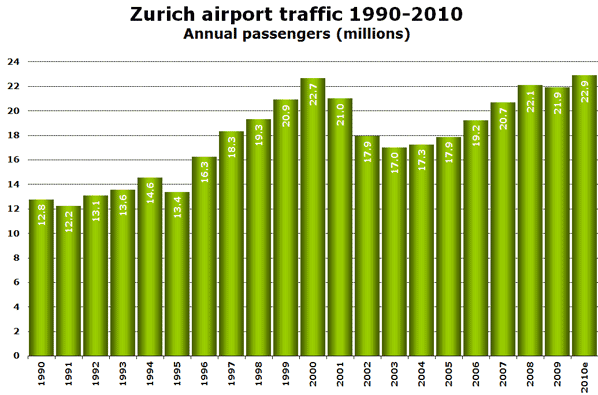 A closer look at traffic by geographic region reveals that European traffic is up 4% but intercontinental traffic is up 7.1%, helped by an impressive 11.1% growth in North American traffic. This has been partly the result of Swiss launching non-stop flights to San Francisco at the beginning of June.

Around one-third of passengers at Zurich are transfer passengers but this segment of the market has declined by 1% in 2010. In recent years transfer traffic had been growing faster than O&D (origin and destination) traffic and had grown its share of the market from 32% in 2006 to 36.6% in 2009. However, this year growth has been driven by O&D traffic which is up 7.9% in 2010. 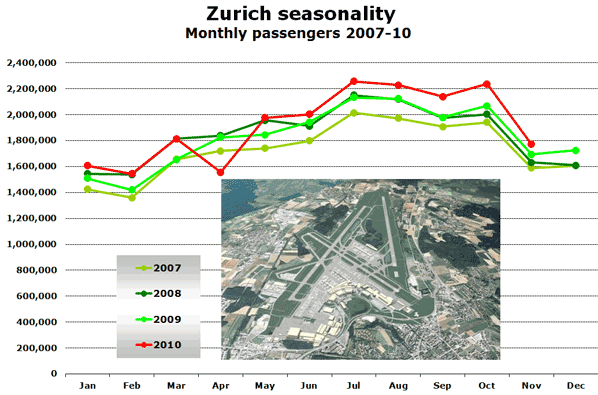 airberlin started a number of new routes during 2010 to consolidate its position as the second biggest carrier at Zurich. Apart from regular multiple-daily flights to four German airports (and Palma de Mallorca in Spain), the airline operates over 20 low frequency routes to Mediterranean destinations during the peak summer season. In winter just a handful of these ‘summer-sun’ destinations operate.

During 2010 a number of airlines made their first appearance at the airport. Vueling started flights from Santiago de Compostela, and Cimber Sterling began daily flights to Copenhagen at the start of the winter season (in competition with SAS and Swiss). Meanwhile existing carrier easyJet now complements its London services (from Gatwick and Luton) with almost daily Manchester flights.

Routes already announced for next year include Vueling starting double-daily flights to Barcelona (a route that clickair operated on a daily basis between October 2006 and October 2008), as well as flights from its new Amsterdam base. Local operator Helvetic, which has been operating Fokker 100s from the airport since 2003, recently announced plans to start a four-times weekly service to Cardiff in Wales.