The Spanish Prime Minister José Luis Rodríguez Zapatero spoke at Valencia’s new Joaquín Sorolla station, to which AVE high speed trains now operate from Madrid. Even the king and queen were on the inaugural journey last Sunday, accompanied by transport minister José Blanco and the PM. Previous examples suggest that this could result in a drop in air passengers of as much as one or two thirds.

Last weekend saw the latest section of Europe’s expanding high-speed rail (HSR) network open to the public when passengers were able to use Spain’s Renfe-operated AVE trains to travel the 400 kilometres (by rail) between Madrid and Valencia in just 95 minutes. In 2009, a total of just over one million passengers travelled (less than 300 kilometres) by air between these two cities, 3% more than in 2008.

This is not the first major Spanish domestic route in Spain to feel the force of rail competition. Back in early 2008, the biggest trunk route in Spain (Madrid to Barcelona) found itself competing with a new high-speed rail link. Since then, annual passenger numbers have fallen from 4.9 million in 2007 to just 3.1 million in 2009, a drop of 37%. 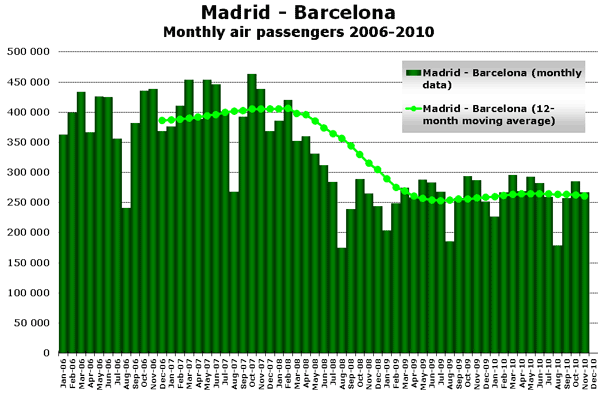 Spain is not the only country to have enhanced its HSR network in recent years. In the summer of 2007, the French TGV network expanded east towards Strasbourg and the impact on air travel demand on this less than 400 kilometre route has been even more dramatic. 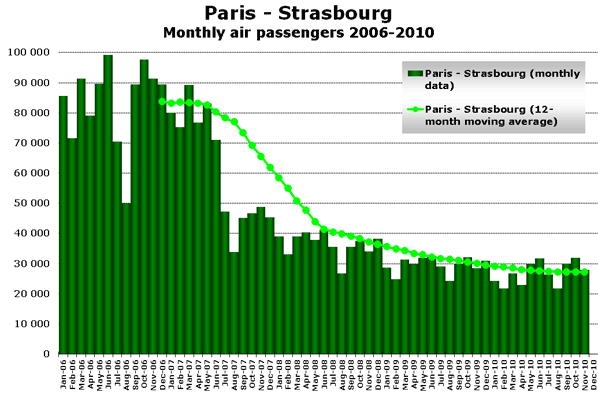 In 2006, just over one million passengers travelled by air between Paris and Strasbourg, but in 2009 this had fallen to just 354,000 and in 2010 looks likely to be around 325,000. This would indicate that around two-thirds (67%) of the air market has been converted to rail travel.