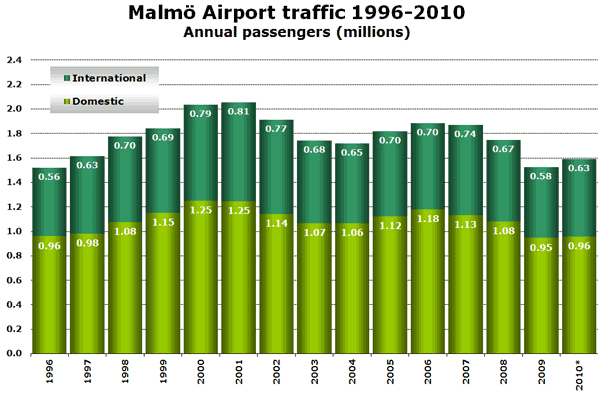 The airport’s passenger numbers have not recovered to its pre-9/11 levels, when annual passenger numbers exceeded two million. Furthermore, the inauguration of the road and train bridge across the Oresund Strait in 2000 improved connections between South Sweden and nearby Copenhagen Airport, creating further competition for Malmö Airport. In 2001, KLM consolidated at Copenhagen Airport and dropped its Malmö route.

The airport has, however, had some success in attracting low-cost carriers, targeting both the local South Sweden market and functioning as a small and efficient low-cost secondary airport for the nearby Danish capital. Between 2000 and 2007, Ryanair served the airport, at its peak in 2007 with five routes.

Wizz Air has steadily increased its presence in Malmö since the airline’s entry in 2004. Although services from Prague were dropped in September this year and the Poznan route operated for 10 months only in 2008, the airline now operates an entire five routes to the airport; from Budapest, Gdansk, Warsaw, Katowice as well as the Belgrade route launched in the last week.

Other airlines targeting Malmö’s ethnically mixed population are Viking Hellas, which offers flights to Erbil and Sulaymaniyah in Iraq, as well as Cham Wings Airlines, which flies to the Syrian capital Damascus.

60% of the airport’s international traffic is charter traffic. In the last year, the tour operator Solresor’s airline Primera has added Sharjah in the UAE and Lamezia Terme in Italy to its network and next year will bring new charter services to Enfidha in Tunisia and Naples in Italy.

Domestic traffic makes up 60% of the airport’s traffic with the major trunk route to Stockholm making up the majority. Malmö Aviation flies 91 times a week to Stockholm Bromma, while SAS and Norwegian serve Stockholm Arlanda with 53 and 17 weekly flights respectively. Norwegian launched its route as recently as at the beginning of this month. Previous operators to have broken the SAS/Malmö Aviation duopoly have included low-cost carriers FlyMe (2004-2007) and Sterling (2007-2008). 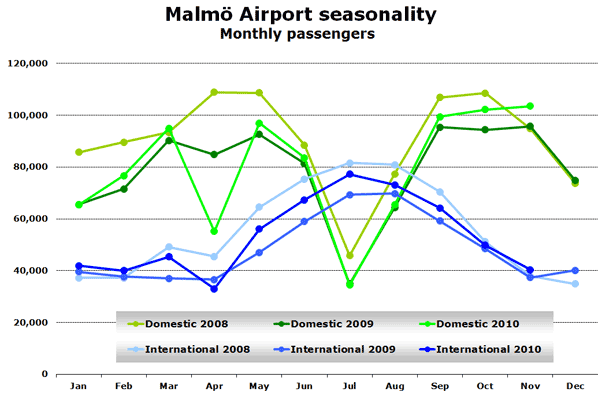 The dominance of business travel to the domestic network reveals itself in Malmö Airport’s seasonality profile. In a typically Scandinavian fashion, the airport’s domestic passenger numbers decline in June, only to collapse completely in the holiday month of July and only partly recover in August. Meanwhile, the international traffic peaks in July, as the largely leisure-oriented international network brings local holidaymakers abroad.

It is evident that domestic traffic took the greatest hit in April, as the volcanic ash cloud caused a 35% decline to domestic passenger numbers, while international passengers only fell by 10% on the previous year.