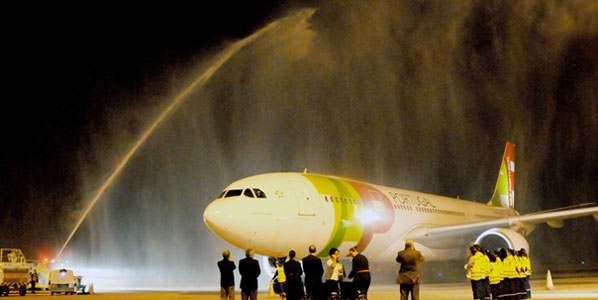 TAP’s arrival at Campinas (Brazil) in July was an anna.aero Route of the Week. anna.aero recently wondered if TAP was going to greatly enhance its connections to Europe’s airports in order to maximize its Latin American connection opportunities. Well, it seems so! The six new just-announced new routes plug a big gap and leave only three major airports in Europe which won’t have TAP services after 2011 – Berlin, Dublin and Palma de Mallorca.

Last week, TAP Portugal announced that it was reinforcing its European network with the addition of six new destinations starting in summer 2011. Athens, Bordeaux, Dubrovnik, Düsseldorf, Manchester and Vienna will be served between one and seven times per week depending on the time period.

Analysis of the busiest airports in Western Europe in 2009 shows that there were 29 airports (excluding Lisbon) handling more than 10 million passengers annually. Of these, 20 were served non-stop by TAP Portugal from Lisbon this summer, while two of the airports not served (London Stansted and Paris CDG) were in cities that TAP Portugal served using other airports (London Gatwick/Heathrow and Paris Orly).

That leaves seven airports of which four (Athens, Düsseldorf, Manchester and Vienna) will now be served in 2011. The remaining three airports still not served by TAP Portugal are Berlin Tegel, Dublin and Palma de Mallorca. Berlin was served in summer 2010 by easyJet (but from Schönefeld airport), Aer Lingus operated daily flights from Dublin, while Palma was served by airberlin partner niki with daily flights. TAP Portugal has served two of these three destinations in the past. Berlin Tegel was served between 1991 and 2001, while flights to Dublin have existed between 1989 and 1993, 1996 and 2000, and 2006 and 2007.