Big year for Estonia as it adopts Euro, Tallinn is European Capital of Culture 2011 and Ryanair opens 10 routes 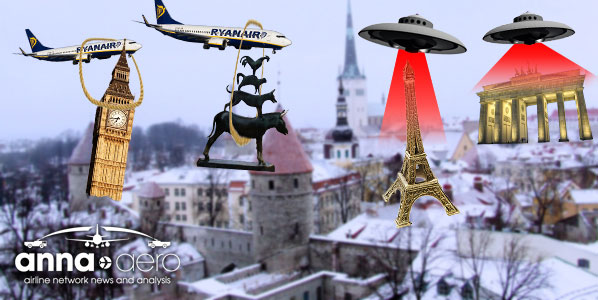 Celebrating the New Year in Tallinn, UFOs brought European landmarks to the Estonian capital. In reality, the Capital of Culture is brought closer to Europe by Ryanair, which soon will have 10 routes to the city, including services from London (Luton) and Bremen.

The start of 2011 has seen Estonia become the latest EU member to adopt the Euro as its currency (replacing the Kroon). Its capital, Tallinn, is also one of two cities to be awarded European Capital of Culture status in 2011 (the other is Turku in Finland). As if these two major events were not exciting enough, the country’s air transport links have been broadened since December by Ryanair which has started serving Tallinn from seven of its European bases (Dublin, Edinburgh, London Luton, Milan Bergamo, Oslo Rygge, Stockholm Skavsta and Weeze), a figure that will rise to 10 by this summer (with the addition of Bremen, East Midlands and Girona). 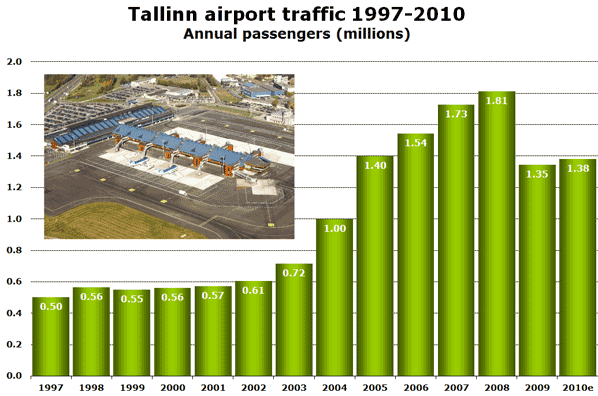 After joining the EU in May 2004, passenger traffic at Tallinn Airport more than doubled in just three years and peaked in 2008 at just over 1.8 million. Then, in 2009, demand fell by 25% as the economic crisis affecting Europe took its toll on the country. 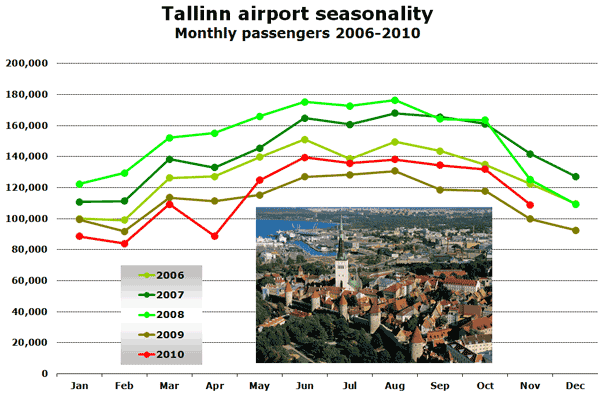 Passenger numbers have been rising once more since May and total traffic for 2010 looks like being up around 3% for the whole year. The Ryanair network will definitely boost passenger numbers significantly in 2011.

The launch of the seven routes so far has enabled Ryanair to become the second busiest carrier at Tallinn Airport, behind Estonian Air but well ahead of airBaltic (serving Riga and Vilnius) and Finnair (serving Helsinki). 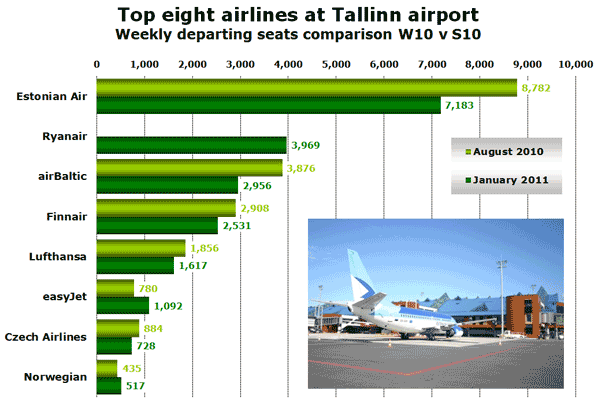 Estonian Air operates a modest fleet of just five 737s and two Saab 340s (flown by Estonian Air Regional), but in September the airline agreed a deal with Bombardier for delivery of two CRJ-900s in early 2011 and a further aircraft in 2012. The airline, which until recently was 49% owned by SAS, is now 90% owned by the government with SAS’ share reduced to just 10%. In the first 11 months of 2010, passenger numbers on the airline were up 1.9% to 539,507. Estonian Air handled almost 42% of scheduled traffic at Tallinn Airport between January and November (down four percentage points). The carrier’s busiest routes are to Copenhagen and Stockholm. The other busiest routes from Tallinn are Helsinki (served by Finnair) and Riga (operated by airBaltic)

Estonian Air also operates a mini-base at Vilnius in Lithuania, from which it offers direct flights to Amsterdam, Milan Malpensa (started on 18 December), Stockholm Arlanda and, of course, Tallinn.

Apart from Tallinn, there are further airports in Estonia serving Kärdla (KDL), Kuressaare (URE), Pärnu (EPU) and Tartu (TAY). Estonian Air operates eight weekly flights from Tallinn to Kuressaare (using the Saab 340s), while Avies Air Company serves Kärdla from Tallinn with 12 weekly flights using a Jetstream 31, a route it is obligated to serve until March 2014. Tartu is served six times weekly by airBaltic from Riga, while Pärnu is served weekly in summer from Stockholm Arlanda by Estonian Air.

easyJet to add Liverpool link in 2011

Apart from the new Ryanair routes to Bremen, East Midlands and Girona (Barcelona), all of which begin in March, other new services already announced for 2011 include the arrival at the end of January of Blue1 on the Helsinki route (taking on Finnair), which will be served 12-times weekly using ATR72s. Helsinki is just 100 kilometres from Tallinn, but the two cities are separated by the Gulf of Finland.

From 26 April, easyJet begins three-times weekly flights from Liverpool (itself a European Capital of Culture in 2008), to complement its existing daily service to London Stansted (which started back in November 2004). The airline also used to operate flights to Berlin Schönefeld between October 2004 and November 2008.