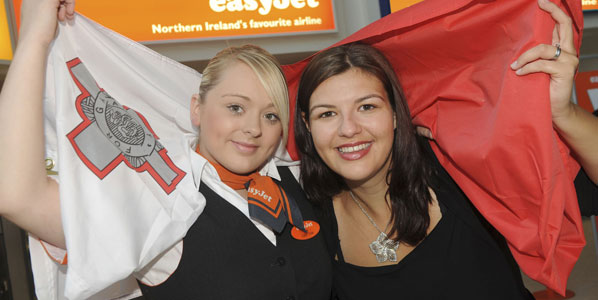 It may come as a surprise to many that Belfast International airport is easyJet’s ninth-biggest base as measured by weekly flights, and its biggest UK base outside of London, bigger than both Bristol and Liverpool. This winter the airline will operate around 200 weekly departures accounting for around three-quarters of Belfast International’s scheduled seat capacity (and flights) across a network of 15 destinations. 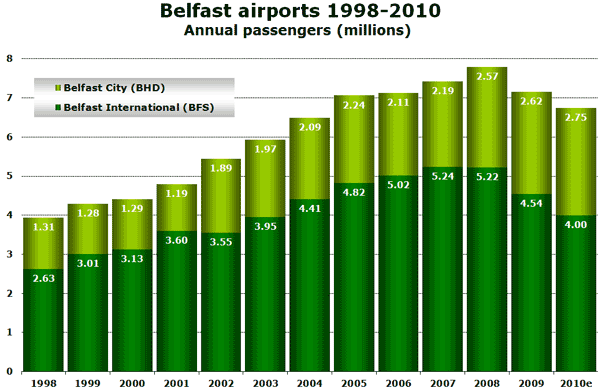 Between 1998 and 2007 passenger numbers doubled at Belfast’s biggest airport, but in the last two years traffic has fallen by almost 25%. Figures in 2011 will not be helped by the decision of bmibaby to transfer its four routes (from Birmingham, Cardiff, East Midlands and Manchester) to the more ‘downtown’ Belfast City airport.

easyJet’s Belfast network is dominated by year-round domestic routes primarily to London, Scotland and Liverpool. In fact, with 41 weekly departures the Belfast – Liverpool route is the airline’s second most served airport-pair this winter after London Gatwick – Geneva (with 52 weekly departures). The airline’s network during the last 12 months can be summarised in the following table.

Routes that have been tried and found wanting include Berlin, Gdansk, Ibiza, Inverness, Prague, Rome and Venice. London Luton flights were transferred to Belfast City in January 2010.

Aer Lingus base since December 2007

Apart from easyJet, two other low-cost carriers have established bases at the airport in recent years. Aer Lingus made the airport a base in December 2007 and has since then served a total of 16 destinations at one time or other. This winter the carrier serves London Heathrow with three daily flights and also operates less than daily to three ‘winter sun’ destinations in Spain (Lanzarote, Malaga and Tenerife). In summer, seasonal services to Alicante, Barcelona, Faro and Rome are added with Gran Canaria being added for the first time this summer. Routes no longer served by Aer Lingus from Belfast include Amsterdam, Budapest, Geneva, Milan, Munich, Nice and Paris.

Leeds/Bradford-based Jet2.com has been serving Belfast International since November 2003 when it began flights from its home base. Since then, over 20 destinations have been served at one time or other, with 11 destinations served last summer. This winter the network consists of just three routes (Geneva, Leeds/Bradford and Tenerife) but several seasonal routes are added in summer, typically with just one or two weekly flights.

Routes that have clearly failed to deliver for the airline include Barcelona, Bournemouth, Malaga, Milan Bergamo and Prague. The Prague market appears to be a curious case as it has been served by three different LCCs (easyJet, Jet2.com and most recently by bmibaby), but this summer the route is not currently served by any airline. 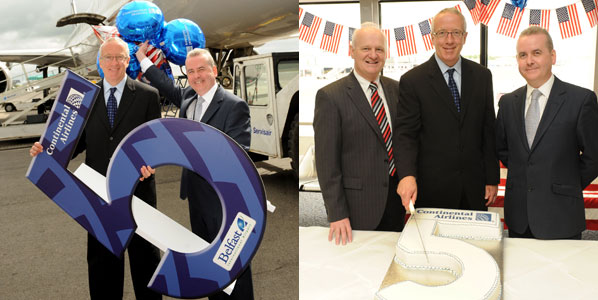 Transatlantic flights to Newark with Continental

Despite a lack of local feed from any alliance partners, Continental operates a year-round service to Belfast International from Newark. In 2009 the route carried 100,000 passengers, the same as in 2008.

bmibaby is not the only LCC to abandon the airport. Between 2007 and 2008 Wizz Air operated flights from both Katowice and Warsaw. Unlike Scotland’s two major airports at Edinburgh and Glasgow, British Airways does not operate flights from London Heathrow having abandoned the market in 2001. Other airlines that have served the airport in recent years but are no longer around include Flyglobespan and Zoom.

Iceland Express will be welcomed this summer

Apart from Aer Lingus’ new twice-weekly service to Gran Canaria starting in March, easyJet will be adding twice-weekly Malta services in February. An interesting newcomer this summer will be Iceland Express offering twice-weekly flights to Reykjavik from 13 June.