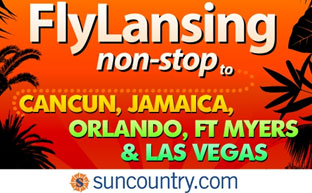 Lansing, the capital of the state of Michigan, has become a focus city for Minneapolis/St Paul-based Sun Country Airlines with the launch of flights to five destinations over the Christmas period. Following in the network planning footsteps of Allegiant Air (which abandoned the airport a couple of years ago), the carrier has identified an under-used airport (Capital Region International Airport) serving a sizable community and is offering low frequency services to winter sun destinations using a 737-800.

“Sun Country has really been looking forward to starting this new service from Lansing’s Capital Region International Airport to some of the most popular vacation destinations in the world,” said Stan Gadek, Sun Country’s president and CEO. “Mexico, the Caribbean, Florida and Las Vegas will now be available to Michigan with non-stop Sun Country flights featuring low fares and award-winning service, including First Class.” At the same time the airline announced that it would be starting daily flights to both Minneapolis/St Paul and Washington Reagan airport starting in April.

The arrival of Sun Country Airlines will mean that spotters at the airport will once again get to see some larger aircraft. Recently the only scheduled services available from the airport have been feeder flights operated by 50-seat regional jets, with Delta operating six daily flights to Detroit (just 74 miles away) and daily flights to Minneapolis/St Paul (455 miles away), and United serving Chicago (178 miles away) with up to four daily flights this winter. 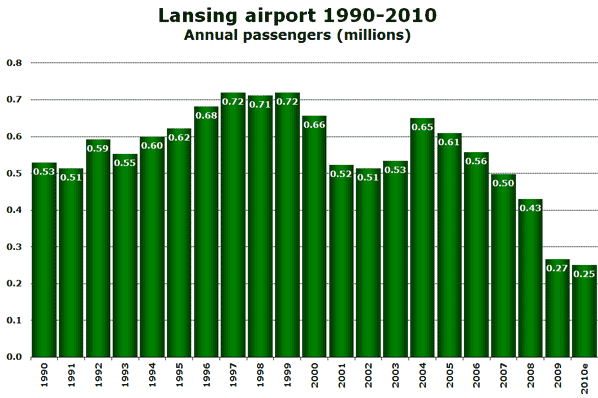 Traffic at the airport peaked in 1997 at almost three-quarters of a million passengers. This year the airport looks on track to handle just over 250,000 passengers. In the first seven months of 2010 passenger numbers were down compared with 2009, but since August year-on-year traffic has been growing.

Back in 2007 the airport also had direct scheduled services to Atlanta and Cincinnati operated by Delta. Interestingly, Allegiant Air has operated from the airport in the past. It began flights to Las Vegas in 2003 and added Orlando Sanford in 2005 and St Petersburg/Clearwater in 2006. However, all Allegiant Air services were cancelled at the end of 2008 when the airline moved its flights to nearby Grand Rapids. 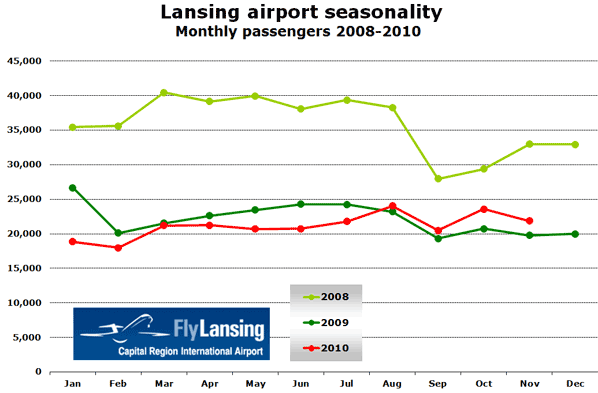