Shafiq Alam Mehedi, the Bangladeshi Civil Aviation and Tourism Secretary, was given an aircraft model by Sezgin Saglam, Turkish Airlines’ SVP Marketing and Sales, to celebrate the new route to Dhaka launched by fast-growing Turkish Airlines last week. The airline has added over 20 destinations in the last two years.

Based on passenger numbers, Turkish Airlines is now the fourth-biggest flag-carrier in Europe, after Lufthansa, Air France and British Airways (source: AEA). With passenger numbers up 17.5% to 21.9 million in the first three quarters of 2010, the carrier may soon overtake British Airways for third place. With a projected 29.3 million passengers handled last year, this will mean that the airline has more than doubled in size in just five years. During that period, international traffic growth has outstripped domestic growth, but in 2010, both segments are growing at between 15% and 20%. The airline’s fleet now comprises over 150 aircraft, with both its widebody and narrowbody fleets a mix of Airbus and Boeing aircraft. The fleet is expected to reach 200 aircraft some time in 2014. 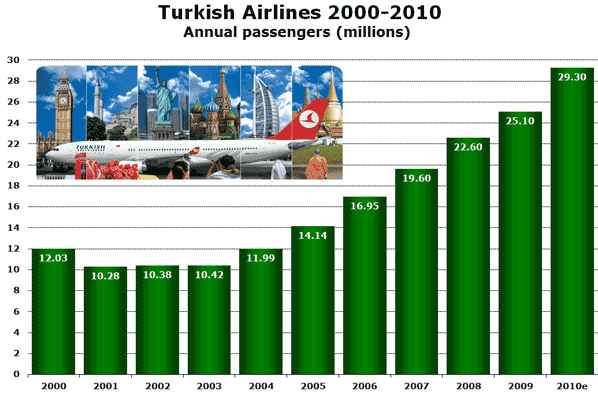 While domestic passengers in 2009 represented almost 47% of the airline’s total, domestic demand as measured by RPKs was just 17% of the network total. Since the beginning of 2009, the carrier has added over 20 new routes from its Istanbul base alone, with three more (Guangzhou, Los Angeles and Shiraz) planned to start before the end of March.

Between Christmas and New Year, two new destinations were added; Dhaka and Ho Chi Minh City, both of which will be served with intermediate stops (in Karachi and Bangkok respectively). Traffic has grown inexorably throughout the last four years with even April’s volcanic ash problems having relatively little impact on the airline, maybe not surprising given its geographic location. 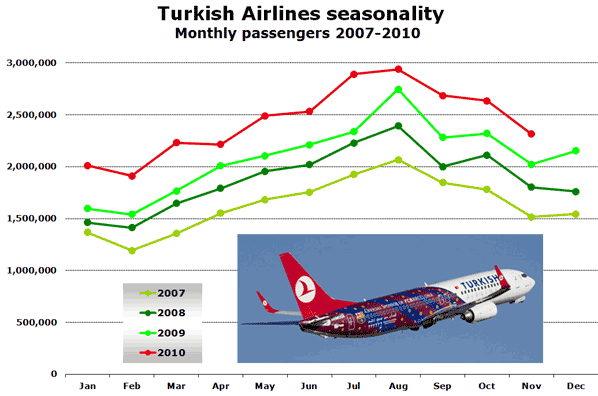 With its new slogan ‘Globally yours’, the carrier is keen to emphasize its growing international network. Analysis of this winter’s schedule from its main hub in Istanbul highlights that Germany is still far and away the leading international market, with more than twice as many weekly departures (129) and departing seats than any other market. Turkish Airlines serves nine German airports from Istanbul with at least daily non-stop flights. 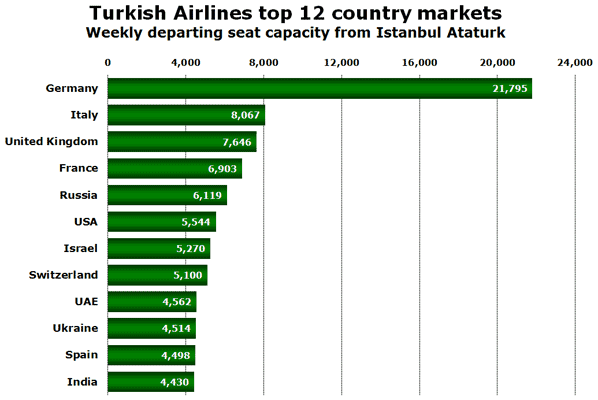 The top 12 country markets are an interesting mix of major European markets (France, Germany, Italy, Spain, Switzerland and UK), plus India, Israel, Russia, UAE, Ukraine and USA. Seven destinations are served in Russia with a further six in the Ukraine, although the best-served international route in terms of weekly flights is London Heathrow with 30, followed by Paris CDG with 28.

According to OAG data this winter, the carrier will be serving 123 international destinations non-stop (plus six others via an intermediate stop) and 34 domestic destinations. It is worth noting that the carrier does not (yet) serve any destinations in Australasia, just one in South America (São Paulo) and only four in North America, although a fifth (Los Angeles) starts in March. 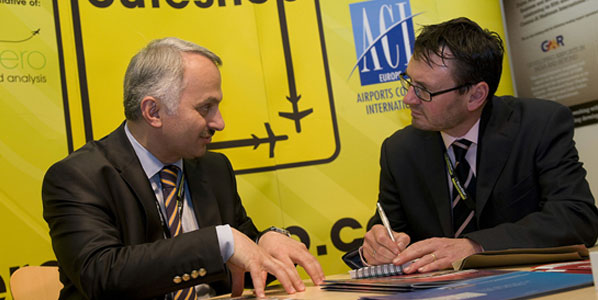 Last year, Turkish Airlines’ President and CEO, Dr Temel Kotil, told anna.aero’s publisher Paul Hogan: “I want Turkish to be the largest airline on Earth – that’s the target – and it is possible if we have enough network growth.” Making use of the strategic location of its Istanbul hub, the airline increasingly relies on international-international transfer traffic, which generated around five million passengers in 2010.

To help spread its advertising message, the airline has been keen to be associated with a number of sports related activities. The carrier is the official sponsor of FC Barcelona and also a sponsor of Manchester United (whose players recently appeared in a TV advertisement for the airline). In the last few weeks, Turkish Airlines has also inked deals with leading tennis player Caroline Wozniacki, and US basketball star Kobe Bryant.