The new year may be less than a week old but anna.aero can reveal that the world’s airlines have already laid plans to start over 600 new routes this year – that’s about the same as we had found last January, although by the end of the year the world’s airlines had gone on to launch over 2,400 new routes, up on the 2,100 we tracked in 2009. Even with unpleasant new taxes, fuel rises, and problems with the Euro, things seem stable enough, so we don’t think it unreasonable to predict a similar improvement this year. So there you have the official anna.aero forecast: there will be 2,700 new routes in 2011. 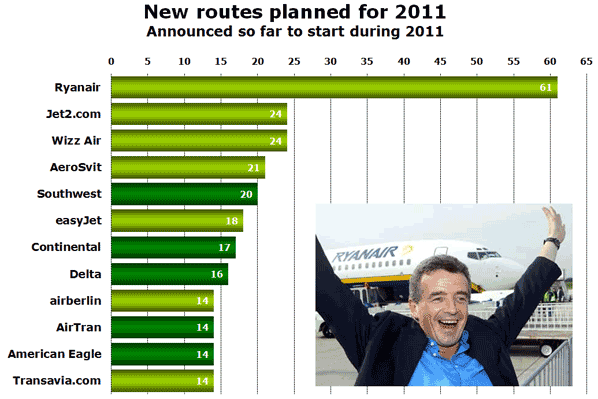 This time last year two carriers, Ryanair and easyJet, accounted for almost one-third of all new routes. This year Ryanair is once more leading the way with at least 60 new routes (not including seasonal re-starts which the carrier now rather confusingly also lists as ‘new routes’ on its website), but easyJet has only a modest 18 new routes planned so far for 2011.

Two other European LCCs, Jet2.com and Wizz Air, currently hold second and third place in the new route rankings for 2011, although this will probably change as the year progresses. The top 12 airlines for new routes are split between Europe (seven, in light green) and the US (five, in dark green), reflecting that these regions are the most liberalised and thus placing fewer barriers in the way of airlines interested in starting new routes. In total we have identified some 140 different airlines that have announced plans to start new routes this year.

Identifying the countries of the airports at each end of all the new routes reveals that US airports feature 260 times (out of a possible 1,228 times), Spanish airports 122 times followed by the United Kingdom (105 times), Germany (80), Italy (61) and France (40).

Although European and North American carriers dominate the rankings for starting most new routes it is worth taking a closer look at what the Middle East “MEB3” airlines have announced so far for 2011.

Again, all three of these carriers are likely to announce additional routes in the coming months that will start before the end of 2011.

We ran this same headline last year, but due to various well-documented issues (and a fire) the aircraft is still undergoing final flight tests. Over a dozen aircraft have now been completed and even painted in customer colours, but the exact date of the first commercial flight (with launch customer ANA) is still unknown.

With 2011 being an ‘odd’ year there is no football World Cup or Olympics to focus global sporting attention. However, for cricket fans the World Cup takes place in Bangladesh, India and Sri Lanka in February and March, while the rugby World Cup takes place in New Zealand during September and October. Meanwhile, the World Championships in Athletics takes place at the end of August and beginning of September in Daegu, South Korea, and the World Aquatics Championships will be hosted by Shanghai in July. Motor racing’s Formula 1 series will touch down in India for the first time at the end of October, something which should at least please Kingfisher owner, Vijay Mallya who also owns the Force India Formula 1 team.

Having weathered the difficulties of 2008 and 2009, many of the world’s airlines reported impressive profits during 2010, although concerns about rising fuel prices mean that industry observers expect profits to be lower in 2011 than 2010. However, increases in taxation, ever more intrusive security measures, and the ever-present environmental issues, mean that airlines and airports will still have plenty to be concerned about this year. However, the desire to travel remains an ingrained part of the human psyche and data from many regions at the end of 2010 suggested that 2011 should continue to see an increase in air travel compared with 2010, with only a few notable exceptions.