Delta gets the blues in Memphis; passenger traffic down 16% in last decade; new Mexico City service started this week 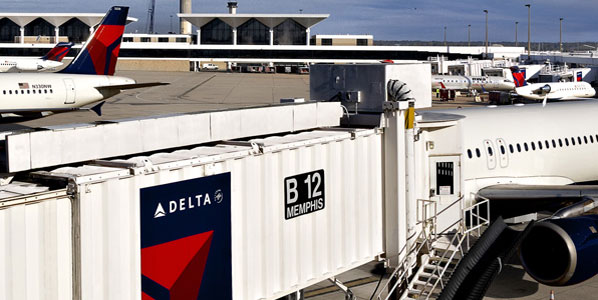 Although FedEx has a major cargo operation in Memphis, Delta (previously Northwest) dominates the passenger traffic. This dominance appears to leave room for competition, as the fares to and from the airport are kept high. (copyright 2010 JEFFREY JACOBS PHOTOGRAPHY, INC.)

Last Saturday, Delta launched its first flight from Memphis International Airport to Mexico City, making it the airline’s sixth international destination from the Tennessee airport (after Amsterdam, Cancun, Cozumel, Montego Bay and Toronto). The new service currently operates just weekly using an A319 and complements the airline’s two existing Mexican services to Cancun and Cozumel. Delta’s hub at Memphis, where it accounts for around 85% of scheduled seat capacity and well over 80% of flights, originally belonged to Northwest. It currently serves a total of 80 destinations from the airport.

Annual passenger numbers between 10 and 12 million 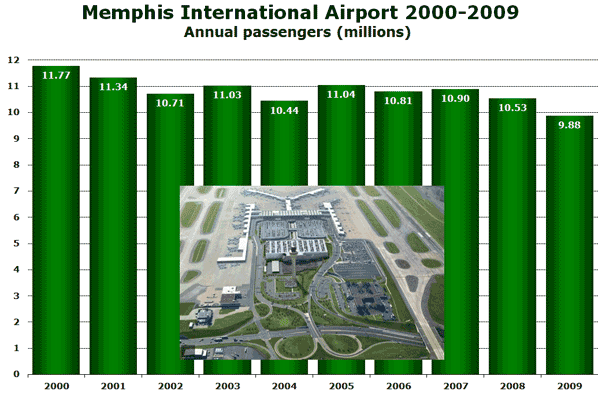 Memphis fares among the highest in US

According to the US DOT Office of Aviation Analysis, domestic fares from Memphis are among the highest in the country. In the first quarter of 2010, the airport ranked as the third most expensive (after Huntsville and Cincinnati) with an average fare premium of just over 30%. For the second quarter of last year, Memphis had ‘improved’ to sixth place (out of 121 airports) with an average fare premium of 25%. The only remotely low-fare airline operating at the airport is AirTran which operates to Atlanta, coincidentally also Delta’s main hub.

This coming April, Memphis International Airport will be the host for the 2011 Airport Cities Conference & Exhibition (ACE2011). The city promotes itself as “America’s Aerotropolis” helped by the fact that Memphis is the world’s busiest airport for cargo thanks to FedEx’s decision to locate its global hub there, and the good rail and road connections to and from the city.

A good venue for the event might be the currently unused Memphis Pyramid, the city’s former major sporting arena which opened in 1991 but closed as a sports venue in 2004. If nothing else, the shape of the building would lend itself to some major corporate sponsorship from Delta! 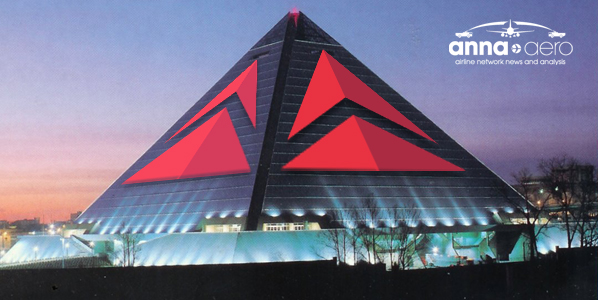 The Memphis Pyramid, unused since 2007, would seem to be an ideal location for Delta's local headquarters. anna.aero believes it could be a great advertisement for the airline in downtown Memphis.