By great coincidence (?), the 40-millionth passenger at Guangzhou Airport last year was a government official. Tan Zhigang is the Vice President of China Federation of Literary and Art Circles and was celebrated with flowers and a free ticket to Brisbane before his flight back to Beijing on 23 December. Australia is the third biggest international market in Guangzhou, which ranks as China’s second-busiest airport.

It may come as a surprise to know that China’s second busiest airport (after Beijing’s Capital Airport) is not in Shanghai (which is actually served by two sizable airports) but in Guangzhou, on the Pearl River Delta, less than 150 kilometres from Hong Kong. Opened in August 2004, the airport features two parallel runways, both of which are over 3,500 metres in length. In 2009, over 37 million passengers passed through the airport, up almost 11% on the previous year. The exact figure for 2010 has not yet been released, but with the help of domestic traffic in China growing by 16% between January and October, Guangzhou airport passed the 40 million mark on 23 December last year. 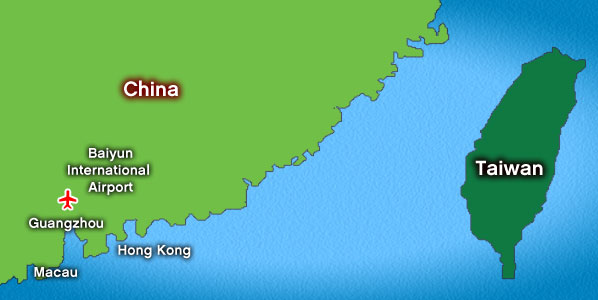 Domestic traffic represents around 85% of passenger movements at the airport, with some 80 domestic destinations served by 14 Chinese airlines. The four busiest domestic routes are Shanghai Hongqaio, Beijing, Chengdu and Hangzhou. 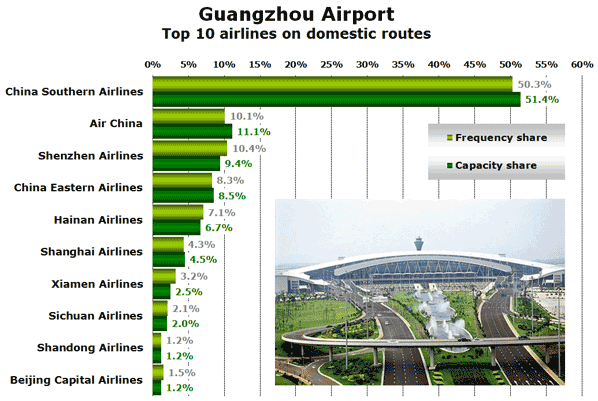 The airport is the home base of SkyTeam member China Southern Airlines, which accounts for over half of all domestic capacity at Guangzhou airport, offering non-stop flights to 64 destinations. Only Air China also has more than 10% of domestic seat capacity at the airport.

Although international routes account for just 15% of current scheduled seat capacity, a total of 23 countries are served non-stop from Guangzhou. Thailand and Malaysia lead the way with Australia a surprise in third place thanks to non-stop flights to Brisbane, Melbourne and Sydney all operated by China Southern Airlines. Non-stop flights to Auckland in New Zealand are due to start in April. China Southern currently serves 28 international destinations non-stop from Guangzhou. 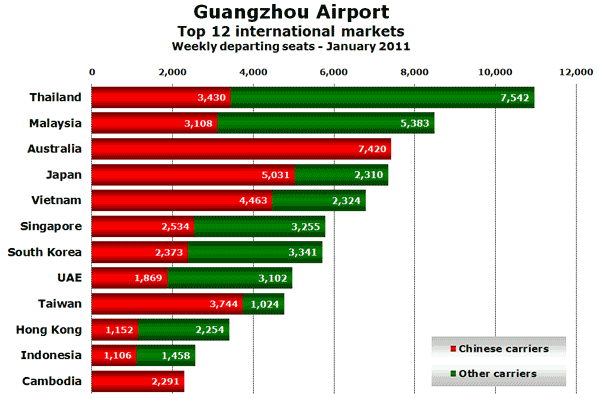 Non-stop connections to Europe are currently confined to Frankfurt (three-times weekly with Lufthansa), and Paris (served by both Air France and China Southern with a total of seven weekly frequencies). However, at the end of January, Turkish Airlines will begin thrice-weekly flights from Istanbul.

The only non-stop flights to the United States are currently offered by China Southern to Los Angeles, although Delta has sought permission to fly from Tokyo Narita, connecting with its US flights to Atlanta, Detroit, Honolulu, Los Angeles, Minneapolis/St Paul, New York JFK, Portland, San Francisco and Seattle. 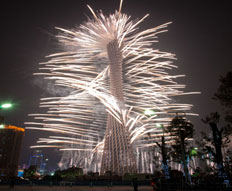 Although China is not famous for encouraging low-cost airlines, Guangzhou airport welcomes regular flights from AirAsia (Kuala Lumpur), Cebu Pacific (Manila), Thai AirAsia (Bangkok) and Tiger Airways (Singapore). Two of the three ‘MEB3’ carriers are present (Emirates and Qatar Airways) but not Etihad (yet). New international routes started in 2010 include China Southern to Brisbane, China Southern to Lagos (via Dubai) and Egyptair to Cairo (which previously was served via Bangkok).