Featured launches: Trieste-Milan Linate and Genoa (October 2010); Milan-Miami, Rome-Los Angeles and Amman (all in June). Hopefully, constant new A320 deliveries will soon see more gaps in the network close, including a number of major European markets.

This week, the airline now operating under the Alitalia (and Air One) name celebrates its second birthday. Based on AEA traffic data for January to October, it appears likely that Alitalia will have carried just over 23 million passengers last year, at an average load factor of just over 70%. The airline’s fleet now consists of some 150 aircraft, including several new A320s that have been delivered in recent months. Since January 2009, 21 new aircraft have joined the Alitalia fleet. 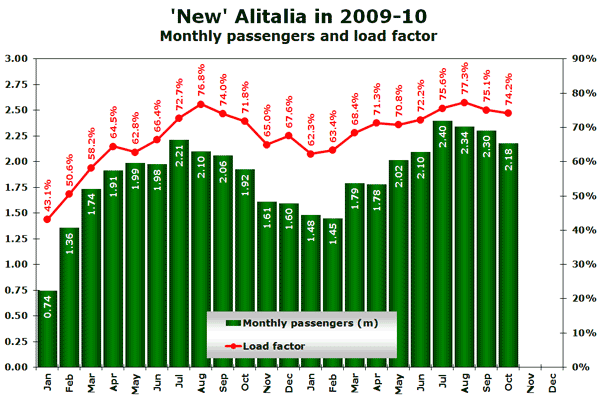 For comparison, in October when Alitalia’s load factor was 74.2%, Lufthansa achieved 81.0%, British Airways 79.9%, Air France 82.5% and Turkish Airlines 76.2%. AEA members as a whole reported average load factors in October of 80.1%, suggesting that Alitalia still has room for improvement.

Capacity up 8% this winter

According to the airline, this winter it will be operating 4,500 weekly flights on 137 routes across 79 destinations. Italian airports account for 26 of the destinations (up three since last winter, while the number of international destinations has grown by four to 53). Weekly seat capacity is around 8% higher than last winter. Air One, the self-styled ‘Smart Carrier’ of the Alitalia Group, will operate its first winter programme from Milan Malpensa to 10, mostly domestic, destinations.

Since our first look at the new Alitalia, the airline has introduced a number of new (and revived) routes during 2010 from several Italian airports, including:

The large number of new domestic routes has helped Alitalia claim a 53% share of the domestic market during the third quarter of 2010, as domestic passenger numbers rose by 10.3%.

New routes already announced for 2011 include Florence to Amsterdam and Catania (starting at the end of March), and new/revived long-haul routes form Rome Fiumicino to Beijing and Rio de Janeiro (both starting in early June) by when Alitalia will have received more new A330s to expand the fleet.

Despite serving 53 destinations in 37 countries, Alitalia still does not serve a number of major European markets. Cities such as Copenhagen, Dublin, Düsseldorf, Helsinki, Lisbon, Lyon, Manchester, Oslo, Prague, Stockholm and Zurich are all lacking Alitalia services this winter. However, several destinations outside of Europe are served non-stop this winter. These are summarised in the following table.

Rome dominates for inter-continental routes with Milan offering flights to Cairo, Miami, New York JFK, Tokyo Narita and Tunis. International flights this winter from Italian airports outside of Rome and Milan are limited to just a handful from Turin (Amsterdam, Berlin, Istanbul and Moscow) and Naples to Athens. Alitalia does not offer any international services this winter from either Bologna or Venice.