Air travel demand in Spain up 2.7% in 2010 despite winter strikes; Iberia still bigger than Ryanair with Vueling third Ryanair CEO Michael O’Leary celebrated the September launch of the  Barcelona El Prat base  in typical fashion but in spite what it says on his t-shirt, for 2010 as a whole, Ryanair was the second-biggest airline operating at Spanish airports, behind Iberia. Among the new services introduced by the Spanish airline in 2010 was the route between Madrid and Córdoba, Argentina, back in October.

Like Italy, passenger numbers passing through Spain’s airports fell in both 2008 (by 3.2%) and 2009 (by 8.1%). Also like Italy, passenger numbers rebounded in 2010, growing by a modest 2.7% to almost 193 million passengers. This figure would have been better if the country’s air traffic controllers had not gone on strike during December, resulting in traffic for that month falling by 2.3%. Total aircraft movements for the year were still down 2.4%. 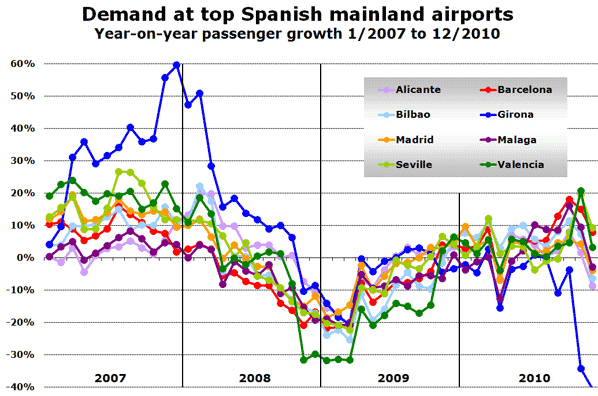 During the 12 months of 2010, the award for the fastest-growing major airport in mainland Spain went to Bilbao (four times); Barcelona, Malaga and Seville (twice each); and Madrid and Valencia (once each). Girona’s dramatic loss of passengers in November and December can be attributed to Ryanair’s growing network at Barcelona, though the airline recently concluded negotiations with Girona Airport and announced a five-year extension to its agreement which will see up to 10 aircraft based at the airport this summer serving over 60 destinations, including eight new ones.

Despite being overtaken by Ryanair during the peak summer period between July and October, for the year as a whole Iberia remained the leading airline operating at Spanish airports handling just under 29 million airport passengers using its own aircraft. A further 7.7 million passengers were carried on Air Nostrum which operates regional services on behalf of Iberia. 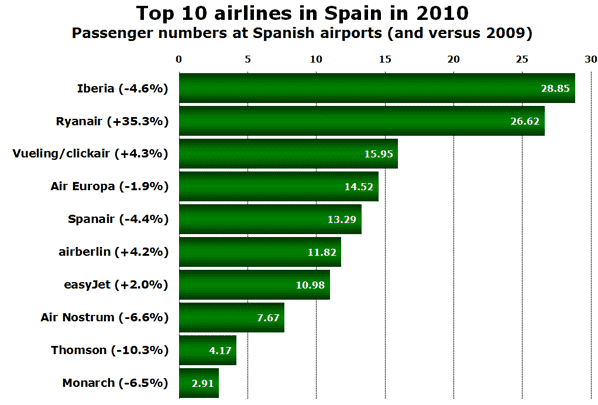 Ryanair’s growth of 35% in 2010 suggests that it has every chance of being the leading airline in Spain in 2011 as a whole, and not just during the summer months. Vueling, in which Iberia has a stake, maintained its third place in the rankings while reporting an increase of 4.3% in passenger numbers through Spanish airports.