Just in time for Christmas, Air New Zealand Group’s GM International Airline, Ed Sims, received the keys to the airline’s first 777-300ER from Boeing’s Larry Loftis, VP and GM 777 programme. The ceremony, which included ribbon-cutting and a traditional blessing, was even attended by Santa himself. Still, the delivery was not enough to help Boeing win the delivery race over ruling champion Airbus.

As 2010 has come to an end, it is revealed that again, Airbus delivered more aircraft than Boeing. This should hardly come as a surprise since, as we reported in our last aircraft delivery report, something extraordinary would have had to happen in December for Boeing to regain the considerable lead already held by Airbus. 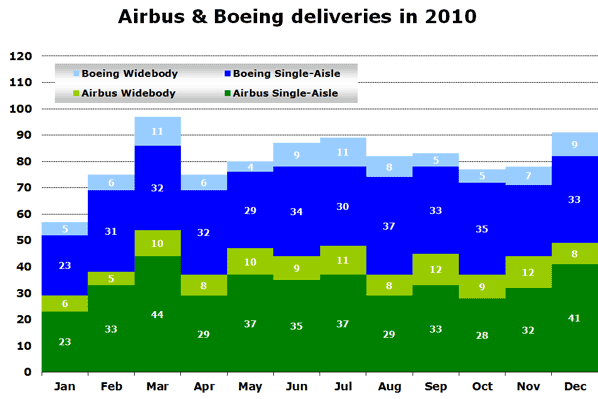 On the whole, the total output from the two manufacturers is almost identical to that in 2009. 971 aircraft were delivered last year, compared to 979 the year before; i.e. a decline of less than a percent. Still, this figure is 113 units, or 13%, more than the deliveries from Airbus and Boeing in 2008.

The European manufacturer’s lead over Boeing has even increased compared with the previous year. Airbus delivered 11 more aircraft in 2010 than 2009; 509 vs. 498. Meanwhile, Boeing’s deliveries decreased by 19 units. 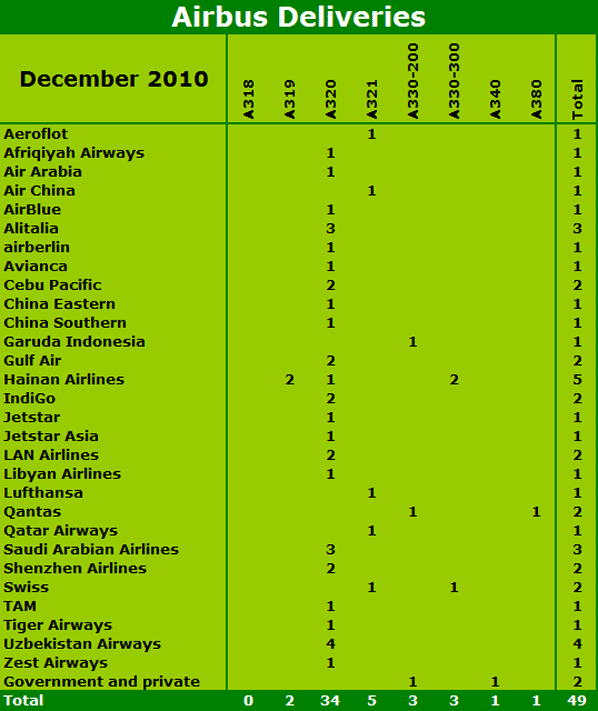 In December, Hainan Airlines (which recently was awarded 5-star Skytrax rating) was the airline to have taken the most Airbus aircraft. The runner-up, behind the Chinese carrier’s five aircraft of both single-aisle and widebody models, maybe surprisingly is Uzbekistan Airlines at four A320s. The Central Asian state carrier thereby took more aircraft than both Saudi Arabian Airlines and Alitalia.

The only A380 to be delivered in the last month went to Qantas, which also took another widebody aircraft; an A330-200. 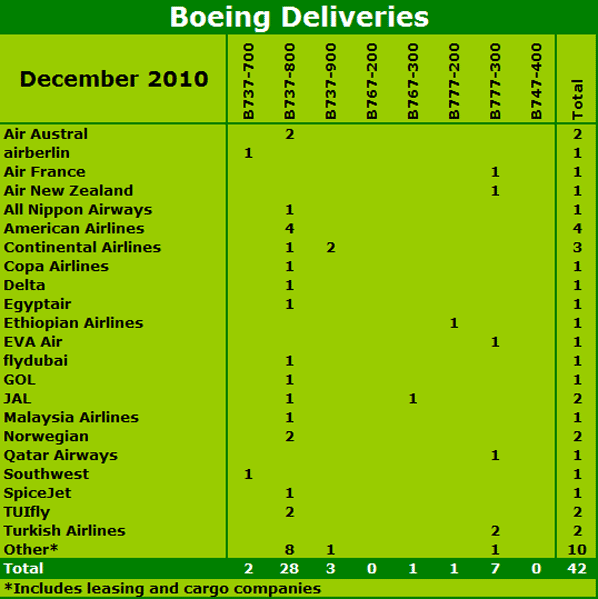 The month also offered some firsts. Air Austral, the airline based on the French Indian Ocean island of Réunion, took its first 737-800s. The two units are the full order and replace the airline’s two 737-300 and 737-500 aircraft.